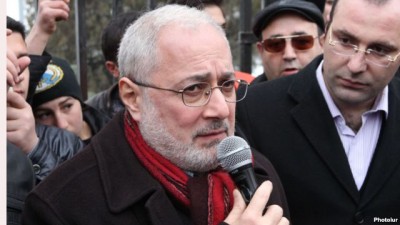 The opposition Armenian Revolutionary Federation-Dashnaktsutyun said on Friday that it could ask the Constitutional Court to rule on the legality of a controversial bill that allows the government to use the armed forces to enforce a state of emergency.

The party’s parliamentary leader, Vahan Hovhannesyan, said Dashnaktsutyun lawmakers will consider trying to lodge such an appeal if the bill is passed by the National Assembly in the final reading. “But we still hope that we will succeed in preventing some things,” he told journalists.

The National Assembly passed the government-drafted law in the first reading on Friday despite strong protests voiced by deputies from Dashnaktsutyun and Zharangutyun (Heritage), the second opposition party represented in the parliament. They said the legislation runs counter to the Armenian constitution that forbids the use of the armed forces for domestic political purposes.

“We have no right to draw the armed forces into political processes,” Petrosyan said during parliament debates last week. “Leave our army alone.”

Under Armenian law, the Constitutional Court must consider appeals signed by at least 27 members of the 131-seat parliament. Dashnaktsutyun and Zharangutyun hold only 22 seats between them.

The parliament factions of the HHK’s junior coalition partners, Orinats Yerkir and Prosperous Armenia (BHK), indicated that they are ready in principle to support a court appeal.

Senior BHK lawmakers said party lawyers are currently looking into the bill to decide whether such action would be justified. “If necessary, we too will join the appeal to the Constitutional Court,” one of them, deputy parliament speaker Samvel Balasanyan, told reporters.

“We will discuss the issue,” said Heghine Bisharian, Orinats Yerkir’s deputy chairperson. “If there is such contradiction the Constitutional Court will eliminate it.”