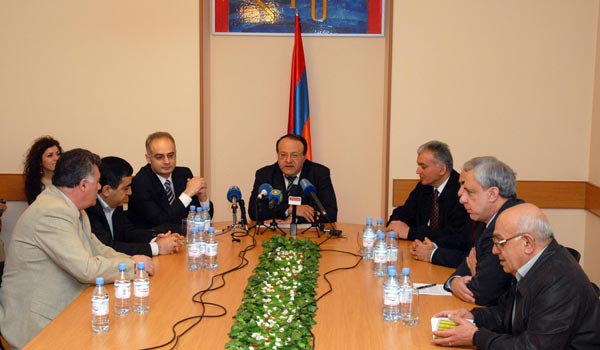 Armenia’s second largest party in the governing opposition and three main opposition groups today pledged to work together in trying to prevent possible vote rigging in next month’s parliamentary elections.

In an unprecedented joint declaration, the Prosperous Armenia Party (BHK) as well as the opposition Armenian National Congress (HAK), the Armenian Revolutionary Federation (Dashnaktsutyun) and the Heritage (Zharangutyun) party announced the establishment of the Inter-Party Center For Public Oversight Of the Elections. They said the conduct of the May 6 vote “in accordance with European standards” is vital for the country’s future.

Senior representatives of the four political forces signed the document following a meeting that was also attended by Galust Sahakyan, a deputy chairman of President Serzh Sargsyan’s Republican Party of Armenia (HHK). Sahakyan refused to put the HHK’s signature on the potentially far-reaching deal, dismissing it as an anti-government ploy.

Sahakyan argued that there is no need for such an anti-fraud structure because the outgoing National Assembly has already set up an ad hoc tasked with preventing vote irregularities. “If they don’t believe in the National Assembly, why should I believe them?” he told RFE/RL’s Armenian service.

Sahakyan also chided the BHK for signing the statement before discussing it separately with the HHK and Country of Law (Orinats Yerkir), the third party represented in President Sargsyan’s coalition government.

“Free and fair elections is probably the most important challenge facing us,” Vartan Oskanian, a former foreign minister representing the BHK, said at the signing ceremony.

Oskanian declared that virtually all elections held in Armenia since independence have been flawed. “I think all of you will agree that it is essential to have a legitimate government,” he said.

“We are sure that representatives of all but one political forces sitting at this table are interested in truly legitimate elections,” HAK representative Levon Zurabyan said in reference to the HHK’s Sahakyan.

“That one force has absolutely no such interest because in case of free and fair elections it won’t get more than 10 percent of the vote and won’t cling to power which it usurped illegally,” Zurabyan charged.

President Sargsyan and his HHK-dominated government have repeatedly pledged to do their best to ensure that the upcoming elections are widely recognized as free and fair. Opposition leaders brush aside these assurances.

The signatories said that they will meet again soon to flesh out the joint effort and decide just how the multi-party structure will operate.

In a related development, the HAK and Dashnaktsutyun announced earlier in the day that they have drafted a joint letter to the Armenian police chief Vladimir Gasparyan challenging him to publicize the names of hundreds of thousands of voters that are believed to be absent from the country. Both opposition forces are worried that the ruling HHK could cast fake ballots in place of those Armenians on election day.

These concerns only intensified last week after the police released the official vote registers that show a sizable increase in the number of eligible voter since 2008. Gasparyan and other police officials ruled out voter list manipulation. But one of Gasparyan’s deputies, Arthur Osikyan, claimed on Tuesday that the police have no data on the absent voters.

Armen Rustamyan, chairman of the ARF-Dashnaktsutyun Supreme Council of Armenia, dismissed those claims. “They definitely know that,” Rustamyan told the press. “I don’t believe in their statements.”

“If there is any state body in Armenia that has precise information about who lives in Armenia and who doesn’t, it’s the police,” Zurabyan said for his part. Zurabyan added that the HAK and Dashnaktsutyun will try to have the BHK and Zharangutyun sign the letter before sending it to the police chief.

Opposition members say that if they manage to prevent the use of administrative resources by the Republican Party at the elections, then the current ruling party will not win a majority in the next National Assembly.

According to observers, the joint initiative is remarkable given the long history of mutual antagonism between Dashnaktsutyun and HAK leader Levon Ter-Petrosyan, who served as Armenia’s first president from 1991-1998. Pundits also view BHK’s stance as a further indication of deepening cracks within the ruling coalition. Furthermore, some analysts already now tip Oskanian, who joined the BHK only in February, as the speaker of the next legislature, which reflects expectations of a strong performance by the BHK, which is largely associated with ex-president Robert Kocharyan, in the May 6 general elections.