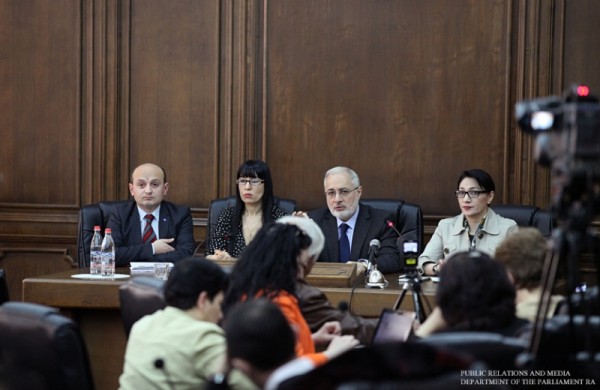 Members of the Armenian delegation who returned from Baku, Azerbaijan, and the 2nd plenary session of Euronest Parliamentary Assembly which was held in Baku on April 2-4, during a press briefing at the National Assembly, said the meeting was positive, despite the inflammatory rhetoric that grabbed headlines.

The Head of the Armenian delegation and chairman of the Armenian Revolutionary Federation (ARF- Dashnaktsutyun) parliamentary faction, Vahan Hovhannesyan considered the second plenary meeting the first one that succeeded, as during the previous one they did not succeed to come to mutual agreement and adopt resolutions. At the same time he highly appreciated the results of the three-day works and thanked the members of the Delegation for cooperation, as well as for resoluteness and bravery. The Head of the Delegation deemed right and justified the decision of the Armenian MPs to leave for Baku. In Vahan Hovhannesyan’s word, before the plenary meeting the Armenian delegation participated actively in the discussion of different reports of Euronest PA’s four committees.

“He [Aliyev] called Armenians ‘occupiers’ and ‘fascists’. This speech had a very negative effect; it was like a cold shower for all delegates. During the break even the Azeri lawmakers approached us and said that they felt bad about Aliyev’s speech, too,” Hovhannesyan said, however not mentioning the names of those lawmakers.

“We believe we had to go, because although unwillingly, Aliyev stroke a blow to his country’s image. We would not managed to do that no matter how hard we tried,” Vahan Hovhannesyan said.

During the session the Armenian delegation was isolated from the media. According to Hovhannesyan, mass media representatives managed to approach them only the first day of the session, however, “they were simply driven out.”

“A Reuters’ journalist hardly managed to take [record] two sentences; he was driven out. But I, using my ‘secret revolutionary tricks’, managed to give an interview to a mass media representative,” Hovhannesyan said.

Members of the Armenian delegation say they noticed no aggression on the part of Azerbaijani MPs, the security workers and people, in general. They said they are satisfied with the hospitality in Azerbaijan, and the treatment of the hotel personnel. Even walking in Baku they did not feel that they were subject to Azerbaijani hostility. “Most probably, there is only one person in Azerbaijan, who wins political dividends through warmongering. The public did not seem eager to fight for obscure objectives and die in our mountains,” Hovhannesyan added.

The head of the Armenian delegation noticed an interesting thing in Baku. “All state institutions and agencies had maps on the walls with Karabakh included. Thus, the authorities are trying to remind the people of the idea of “Big Azerbaijan,” about the things they want to forget about.” According to Vahan Hovhannisyan, this is a feature of а society with too many hang-ups.

Head of Heritage parliamentary opposition faction Stepan Safaryan says that they have visited an Armenian church, which was without a cross, and the Armenian diocese, which Azerbaijanis have turned into a library.

Referring to the criticism voiced by some press, that the Armenian delegation should have left the hall after Aliyev’s statement, Hovhannesyan says: “We could leave the hall, however, it was our work, we are full members of Euronest, and Azerbaijan was the hosting country, and Aliyev was simply a guest at the Assembly.”

In an interview from Baku with the Armenian media from reporting on April 3, Vahan Hovannesyan had said that during the Euronest Parliamentary Assembly Bureau’s meeting with Aliyev, the president was welcoming and did not even mention the Karabagh conflict. But, in what amounted to an attack on a visiting delegation, on April 3 Aliyev asserted that Armenia is occupying Azeri territory and called the policies of its neighbor fascist.

“During the plenary session, Aliyev made shocking aggressive statements calling us fascists, occupiers, who have desecrated their graves. In short, it was quite an awful speech,” Hovhannesyan had told the Armenian media. “We are preparing documents now and we’ll distribute them here. We are also going to address the issue in our presentations.”

“Even our European colleagues were shocked,” he added. “Everyone expected that at least the Armenian delegation would be thanked for participating.”

Hovhannesyan explained that Armenia’s participation in the second parliamentary assembly of Euronest, the body responsible for implementing the European Union’s Eastern Partnership program (Eop), was welcomed by a cross section of representatives at the conference in Baku.

However, the speech by Aliyev left many surprised and scrambling for words. Hovhannesyan said that EU Enlargement Commissioner Stefan Fule attempted to alleviate Aliyev’s attempts to blame the Karabagh conflict on Armenia through what has become typical anti-Armenian rhetoric and propaganda.

During Euronest’s Political Affairs Committee meeting on April 3, a heated discussion took place between Azerbaijani Foreign Minister Elmar Mammadyarov and Armenian Parliamentary Member Naira Zohrabyan, who corrected the Azerbaijani minister when he spoke of the “occupied territories” of Azerbaijan by Armenia. Zohrabyan said that Mammadyarov was intentionally falsifying historical events and distorting facts. “What Mammadyarov is calling ‘occupied’ is nothing but the realization of one of the basic principles of international law, that is, the realization of people’s right to self-determinations,” said Zohrabyan. “The real occupation is that Azerbaijan is currently occupying the Shahumyan and Mardakert region,” she added.

Euronest was attended by a 60-member EU delegation, as well as the delegations of Azerbaijan, Ukraine, Georgia, Moldova, and Armenia, comprised of 10 people each.

ARFD MP to Aliyev: Nobody Has a Right To Call Us Fascists

In response to Azerbaijani president Ilham Aliyev’s statement, made earlier at the Euronest Parliamentary Assembly session in Baku in which Aliyev referred to Armenians as “fascists”, ARF Dashnaktsutyun Party Member of Parliament Lilit Galstyan expressed her protest saying that as a long-time member of the Socialist International, she “cannot accept being treated like fascists by anybody, whatever his rank is in his country…”.

“Armenia joined the Euronest family with the confidence that Eastern Partnership is a community where all members share equal responsibilities, principles, values and, most importantly, respect fundamental principles of international law and fundamental freedoms,” she said.

“We entered the Euronest family with the hope that jointly we can create a political climate where fruitful and constructive dialogue would be held based on understanding and respect.

“Unfortunately, the morning session started with statements that not only did not provide the objective evaluation of the situation, but proved to be damaging for the Nagorno-Karabakh negotiation process, as well as the efforts of Euronest Parliamentary Assembly to create a political framework for cooperation and democratization of member countries.”