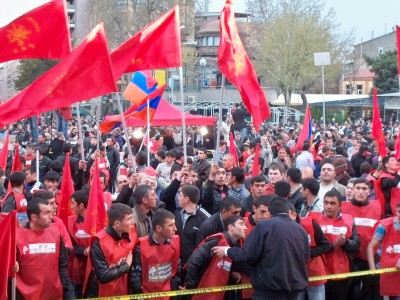 Thousands of Armenian voters turned out Wednesday, April 10 at Liberty Square for an election rally to kick off the Armenian Revolutionary Federation’s parliamentary election campaign.

The crowd joined “Vote Is Power” movement’s activists, AYF Armenia members and supporters who had marched earlier from Matenadaran to the square. Despite the rain, people of all ages were there, waving the Armenian flag or holding signs with the ARF-D’s campaign logo “Liberty. Justice. The ARF”.

With a pledge to return power to the people and a comprehensive regime change, the ARF-D held its election rally one day after unveiling its election platform to reporters at a gathering on Monday held at Erebouni Plaza Business Center.

The welcoming speech was delivered by ARF-D member Gegham Manukyan and next the floor was given to candidates Vahan Hovhannesyan, Armen Rustamyan, Artsvik Minasyan, Aghvan Vardanyan and ARF-D Bureau Chairman Hrant Margaryan. They all called the voters to show confidence in ARF-D who pledges to address the social and economical issues of the country, protect the rights of the next generations in respect to national interests, strengthen democracy and give the power back to its rightful owner as provisioned by the Constitution, the people of Armenia.

“We are not here to claim power by force or to buy it with bribes like others do,” said Head of the ARF-D parliamentary faction and Bureau member Vahan Hovhannesyan. “We are not here to beg for power. We are here to take what belongs to us based on the Constitution. We want to return the power to you—the people.”

Saying that international experts had praised the ARF-D’s election platform, Hovhannesyan proclaimed: “This is it, the real revolutionary spirit. If we manage to make it a part of our lives with your help, then not only the coming generation but you too will witness the revolution.”

Hovhannesyan also emphasized the need for voters to ban together and not allow “corrupt individuals and thieves” from becoming members of parliament. 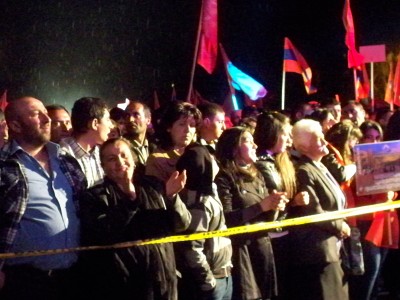 Dismissing pledges by the ruling Republican Party of Armenia (HHK) of sweeping changes in country, the leaders of the ARF-D speaking at the party delineated the poor socio-economic conditions plaguing Armenia, mass exodus, social injustice and the current regime’s inability to resolve the country’s problems as a wake up call for change.

One of the proposals set for by the ARF-D is a switch from a presidential system of government to that of a parliamentary system. It is through such drastic reform that the ARF-D is hoping for what it calls “comprehensive regime change” in the country that “serves the people”.

“This is a government that until now was saying that everything is alright in our country and bragged about its achievements. Now when they say ‘let’s change to believe’ that sounds pathetic,” ARF-D parliamentary faction member and ARF-D Supreme Council’s Chairman Armen Rustamyan declared in reference to the Republican Party’s campaign slogan.

“Because, if things are fine, what should we change? If things are bad, however, why shouldn’t we change them? And this is what we must do together,” said Rustamyan adding that “It would be meaningless to expect anything serious without” a comprehensive regime change. 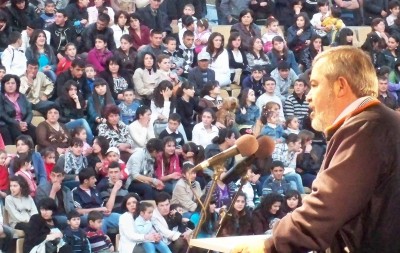 ARF-D Bureau Chairman Hrant Markaryan made notice of the state’s vulnerability caused by the on-going migration, poverty and the lack of prospect for the youth.

ARF-D continued its pre-electoral campaign rallies in Kapan, Yeghegnadzor, Armavir and Aragatsotn. Attendance to all events is considered quite impressive by the media.