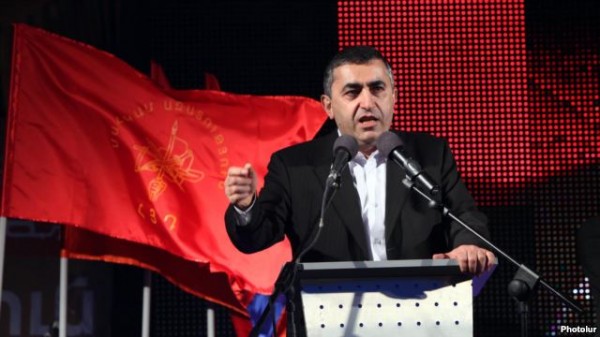 Three leading political forces that have pledged to jointly fight for the fairness of next month’s parliamentary elections are ultimately interested in changing Armenia’s current government, a leader of the opposition Armenian Revolutionary Federation (Dashnaktsutyun) said on Wednesday.

“The goal is not only election oversight but to ensure that elections in Armenia become means of changing the government,” Armen Rustamyan told RFE/RL’s Armenian service (Azatutyun.am). “Unfortunately, this has not been the case in Armenia until now.”

“Changing this situation is beneficial for those political forces that really want regime change and want to change the government without upheavals, without putting the public and our fellow citizens at risk,” Rustamyan said, referring to Dashnaktsutyun, the opposition Armenian National Congress (HAK) and the Prosperous Armenia Party (BHK), a member of the governing coalition.

The three election contenders decided to set up the Inter-Party Center for Public Oversight of the Elections on April 4. BHK leader Gagik Tsarukian and the HAK’s Levon Ter-Petrosian stressed on Tuesday that they have struck no far-reaching political deals and are only cooperating on the proper conduct of the May 6 polls.

Rustamyan argued, though, that regime change will happen “automatically” if elections held in Armenia are truly democratic. “If we create an environment where democratic elections take place, this issue will be solved,” he said.

Rustamyan spoke to RFE/RL’s Armenian service after attending a third meeting of senior Dashnaktsutyun, BHK and HAK figures that discussed details of the anti-fraud center’s activities. They named three individuals who will coordinate the center’s work.

Predictably, the meeting was boycotted by another major opposition party, Zharangutyun. It was initially ready to join the task force but demanded that the top leaders of the participating forces and Tsarukian in particular personally commit themselves to combating electoral fraud. Zharangutyun leaders have also accused the HAK and Tsarukian’s party of having ulterior motives.

The Zharangutyun criticism and allegations were dismissed by the participants of Wednesday’s meeting. “Regarding those absent from the task force, I have doubts as to whether they really want free and fair elections,” said Vartan Oskanian, a former foreign minister representing the BHK.

Oskanian and Rustamyan also condemned recent days’ reported attacks on HAK activists campaigning in a Yerevan district dominated by a government-linked businessman. “These are unfortunate incidents. I think they must be promptly condemned and prevented because they cast shadow on the fairness and, at the end of the day, results of the elections,” Oskanian told reporters.

The BHK representative added that the violence ran counter to President Serzh Sarkisian’s repeated calls for election contenders to show mutual tolerance and avoid “hostility.” “I’m glad that the president of the republic is making such calls,” “But right now they seem to be neglected,” he said.