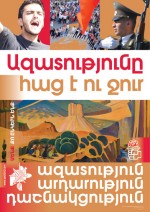 Vahan Hovhannesyan, ARF-D Bureau Member and Leader of the ARF-D parliamentary Group in the Armenian Parliament

Question: Mr. Hovhannesyan, the media in Armenia has been recently flooded with news of the arson of DIY and the bail-out of the suspects of that arson. The owner of the club has announced that the struggle against her club is sponsored by the ARF-D because ARF-D parliamentarians Artsvik Minasyan and Hrayr Karapetyan paid their bail.

Vahan Hovhannesyan: I would advise the owners of the club and their internal and external sponsors to refrain from politicizing a criminal office; it is under investigation and we hope that an objective investigation will clarify who the perpetrators, ringleaders and organizers of this crime are. No one should attempt to fish in murky waters until the conclusion of the investigation and neither should they try and gain political capital through defamation.

Question: Nevertheless, the two arrested youth have familial relations with a former, high-ranking ARF-D member, and the guarantors, those who paid for the bail were ARF-D members.

Vahan Hovhannisyan: The issue must not be taken out of context. As Artsvik Minasyan noted in his statement, “Pre-trial detention in Armenia as a preventive measure should be applied in the rarest of cases, and it should not become a regularly applied practice.” Moreover in the section “the Construction of a Modern Democratic State” in the ARF’s political platform for the 2012 parliamentary elections it states the importance of “reduction of pre-trial detention as a preventive measure.” The ARF never forgets its campaign pledges once the elections are over. It was based on this conviction that Artsvik Minasyan and Hrair Karapetyan, on their personal initiative, mediated to have the pre-trial detention replaced by bail. A basis for their involvement was the fact that the suspects did not present a danger to society and their being out on bail would not obstruct the investigation process. The essence or the target of the actual crime was not a factor in the decision of the parliamentarians.

We can bring forth many examples when Artsvik Minasyan and Hrayr Karapetyan and other ARF parliamentarians have undertaken similar initiatives. Thereby, accusations that the ARF organized and guided those youth go beyond the limits of absurdity and are without foundation. These were guided by those political powers who cannot tolerate the ARF’s activities in Armenia and in the Diaspora that are aimed at the establishment of democracy in Armenia, the respect for human rights, the establishment of social solidarity and the protection of the rights of the Armenian people. I am sure that many people don’t like this and they would not be averse to discredit the ARF. And Tsomak is a small player in this big game, who probably already received her compensation by appearing on television screens and in newspaper headlines.

Question: And how do you feel about the fact that arson took place?

Vahan Hovhannisyan: A crime has taken place. All the participants in this crime must be found and punished by the full extent of the law. Violence against peoples’ private property has taken place and has resulted in financial loss. All of this must be compensated. If threats have been made against this establishment or its owners, then the state is obligated to take steps to secure the safety of not only the establishment and its owners but also its customers.

Question: Some used this opportunity to blame the party in spreading homophobia and fighting against sexual minorities.

Vahan Hovhannisyan: Over its 122 year history, many false accusations have been leveled against the ARF. There is even a song about that. As I have already noted, the ARF continues to struggle for the establishment of democracy and social solidarity in Armenia. The ARF has always struggled to eradicate violence against free will because violence against free will and discriminatory behavior against any one undermines harmony in society and opens the door to foreign enemies. Hence we have not preached a phobia against anyone, because that goes contrary to the very nature of the ARF. We do not deny that there are different attitudes present in our society regarding sexual minorities. Minorities in general – national, religious, racial and other – are often the target of intolerance but the ARF’s conviction is that a limitation to the civil rights of law-abiding people or any kind of violence is unacceptable.

Interview With Yerkir Daily Newspaper, 17 May 2012

Armen Rustamyan, Chairman of the ARF-D Supreme Council of Armenia

Any violence and illegal act, regardless of who has committed it and against whom, is unacceptable and condemnable for the ARF-Dashnaktsutyun. At the same time, the recent politicization of the event is immoral and equally condemnable. We have said and repeat for the last time that the ARF-D has not had and does not have any connection with this incident.

As for the intercession by the ARF-D Members of Parliament to change the restraint means from detention to bail, that is a personal assurance, which has been repeatedly utilized in other cases as well, and the aim of which is and continues to be changing the practice in Armenia where detention has become the sole or the major means of [pretrial] restraint.
If after such a clear declaration attempts to connect the ARF-D with this case continue, we will be inclined to think that they are a clear political order to unnecessarily misuse the name of the ARF-D.

Statement by Maria Titizian, ARF-D Representative to the SIW and SI Vice President

The recent events surrounding the firebombing of DIY club in Yerevan have led to much discussion and speculation, not only in Armenia but around the world. Any type of violence is unacceptable and condemnable. The perpetrators of this crime must be punished within the letter and spirit of Armenian law. If today their target is the LGBT society, tomorrow it can be anyone else. Sadly, there is much intolerance in Armenian society, not only toward the homosexual community, but towards anyone or any group who deign to hold views that are not widely accepted. I hope that in the coming weeks and months this discourse can move away from its obvious politicization and manifest itself in an honest, open and candid dialogue about the kind of society we want to have, a society where there is respect, tolerance and mutual acceptance.

As a long-standing member of the ARF and Vice President of Socialist International, I say with the utmost responsibility that, contrary to the media spin, this is NOT the position of the party that for 122 years has advocated for freedom, justice and equality. Every human being has the inalienable right to live their life as they see fit, without fear or recrimination or alienation from society.