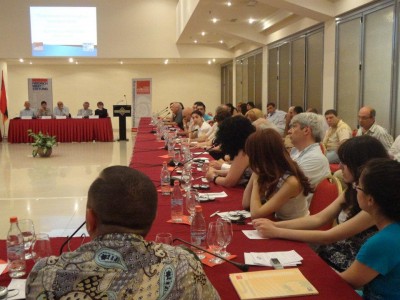 The Hrayr Maroukhian Foundation with the support of the Friedrich Ebert Stiftung hosted a presentation and roundtable discussion on the publication of “Economics and Social Democracy” at Ani Plaza Hotel on June 11.

This is the second volume of the series “Social Democracy Readers” prepared by the Academy for Social Democracy (Bonn, Germany). The first in the series, “Foundations of Social Democracy,” was translated and published by the Hrayr Maroukhian Foundation in 2011. The objective of the event was to encourage public debate about social democratic ideas for governance and economic policy.

The event, moderated by ARF-D Bureau member David Lokyan began with welcoming remarks by Maria Titizian, director of the Hrayr Maroukhian Foundation and Michael Weichert, director of the Friedrich Ebert Stiftung’s South Caucasus office. The first keynote speech was presented by former German Minister of State, Christoph Zopel, who discussed the foundations of social democracy and the economic successes in Germany that have resulted from social democratic policies. He noted the discrepancy in having 40% of Armenia’s population living in poverty, while a few oligarchs control the country’s wealth. Economist and former deputy of the Armenian National Assembly, Ara Nranyan then presented a brief history of Armenian economic policies, which transitioned from communism to capitalism 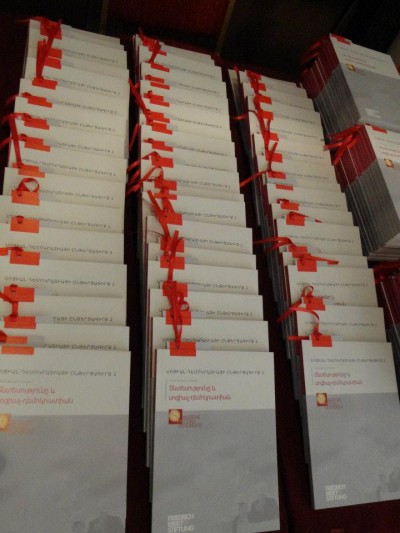 following the collapse of the Soviet Union. This led to economic disparity and the rise of monopolies, leaving large segments of the population vulnerable to market fluctuations, especially during times of economic downturns. He discussed the book and the application of social democracy in Armenian governance a viable alternative to neoliberalism, which saw the privatization of state-owned enterprises and deregulation of the market over the past twenty years.

Close to 100 people attended the event, including German and Armenian politicians, economists and representatives of civil society. The discussion that followed the presentations was centered on broader application of the book’s principles for Armenian voters, policy makers and politicians. Participants discussed how social democratic principles can be applied to areas beyond economic policy, such as in environmental and foreign policies.

The Hrayr Maroukhian Foundation is a social democratic think tank in the Republic of Armenia. Its focus and aim is to encourage public debate and promote equality, freedom and democracy in Armenia and the region. The Foundation produces academic research papers, linking them to political decision-making and policy, organizes conferences and round tables, publishes studies on social democracy and conducts trainings for young political leaders.