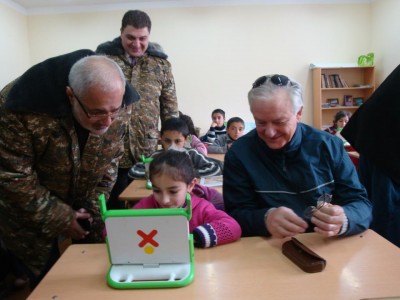 1in.am writes that ARF-D Bureau member and Chairman of the Armenia-Uruguay interparliamentary friendship group, Vahan Hovhannesyan who was accompanying the delegation from the House of Representatives of Uruguay, headed by its President Jorge Orrico, to its recent official visit to Armenia and Mountainous Karabakh believes that the journalists’ questions such as “When are you going to recognize Mountainous Karabakh Republic” weren’t correct.

According to Hovhannesyan, recognition bears two meanings: recognition of the country and its accomplishments and then recognition of the state. It seems that, in Armenia only the second meaning is of importance. “It is for the first time that during Artsakh’s (Mountainous Karabakh) years of independence the Speaker of an acknowledged, ancient, with democratic traditions state’s multipartied parliament pays an official visit and meets with the President, Prime Minister, Parliament’s Speaker and civil society representatives. This is a significant segment of recognition. It is not by accident that Azerbaidjan got hysteric and the first two days didn’t want to mention that at the head of the delegation was the President of Uruguay’s House of Representatives.” Hovhannesyan said that the delegation came on a fact-finding mission so as to present to the Uruguayan government a complete picture of Mountainous Karabakh whilst the official recognition takes place on another level where the the President and the Parliament are informed of the decision which the executive power will make and the foreign ministers will announce. “I don’t know the way their parliament will vote because voting in Uruguay is based on the principle of democracy. This is why, the questions that were posed to him sometimes lacked of tact and obstructed the process” Hovhannesyan said.

The ARF-D member appraises three factors for this last successful development; the Office of the Armenian National Committee of Uruguay, Armenia’s embassy and Armenia’s Parliament. “It was the cooperation of those three that made Azerbaidjan so nervous. Azerbaidjan says that the Armenian Diaspora is their main enemy. They fail to comprehend that Armenia and Armenian Diaspora are one and the same. The Diaspora has only one issue on its agenda and that is the interests of Armenia. The identification of those interests is what scares Azerbaidjan” Hovhannesyan argued and urged Armenia’s foreign missions to follow Uruguay’s example.