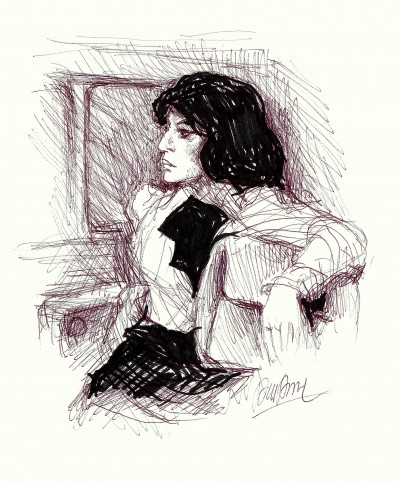 (armenkaro.org, November 22, 2012) – The closing days of the 19th century, and the beginning years of the 20th, mark the period when Armenian women scored gradual emancipation through their involvement in the liberation movement, which culminated in the formal establishment of a sovereign Armenian state. More often than not, this involvement manifested itself through active participation in organizations such as the ARF Red Cross (the future Armenian Relief Society, or ARS) or in the actual ranks of the ARF, often in hazardous missions.

The following narrative, illustrating this period, is an excerpt from Simon Vratsian’s autobiographical work Keanqi Ughinerov (On the Byways of Life), published in 1955 by the “Houssaper” Press in Cairo, Egypt.

During the Armenian-Tatar conflict, Rostov-Nakhitchevan, along with its neighboring cities, was a source for the acquisition of weapons. Through a variety of means, rifles, handguns, and cartridges stolen from armories or barracks were acquired and cached at certain locations. From there, by various secluded roads and means, they were transported to the Caucasus.

There were still weapons caches left in Nalband. I had just started my career as an itinerant field-worker when a letter arrived from the Voskanapat Committee, informing us of the imminent arrival of ungerouhi Siranoush Shahgeldian for the transport of goods, and asking us to assist her. The Central Committee assigned me to that task.

At first glance, Siranoush impressed me as a very serious person. She was an attractive girl, with abundant hair, pleasant features, well-developed chest, expressive eyes, but a closed mouth. Though they said she was a student, she looked more like a teacher. As I got to know her, it turned out that she was well read, particularly in Russian novels. She could also sing, to herself. Whatever made her become a revolutionary? A Dashnak, at that, involved in armed struggle…!

Years later, the mystery was partly resolved for me; during my graduate student days, when I met Haik Torosian, a student who had been in the ranks of the Baku fighting units. Siranoush had been in love with Haik. Was this, perhaps, the reason for her involvement in revolutionary activities…?

Yet aside from that, Siranoush was a gutsy girl, cool, inventive, fearless. It turned out that she had already been in Nakhitchevan several times before and had returned to Baku with loads of weapons. She was familiar with the cities of the region and was experienced in gun-running and other secret missions. Sad to say, I was her opposite, thoroughly green and inexperienced.

A few days later, two more girls arrived from Baku, recommended by the Voskanapat Central Committee, and the four of us together went to Novocherkask, the capital of Don Province, a couple of hours away from Nakhitchevan by train. There were Mauser 10-shot pistols available for transport there. Siranoush knew the location.

From the station, the carriage took us to the edge of the city in half an hour and stopped in front of a modest shack. Siranoush rushed in and came out in a few minutes with a Russian woman—four leather bags in four hands. Cracking jokes, the coachman loaded the “goods” and we were back at the station in half an hour, sitting around a first-class restaurant table. The Tatar waiter took our orders in a deferential manner, and we started eating while waiting for our return train.

I was amazed at the cool demeanor of Siranoush and the other girls. They behaved as though they were on a pleasure trip, and their bags contained nothing but innocent items. They were bantering with the coachman and the waiter. As moods dictated, they burst out laughing or exchanged comments in whispers. At times, they openly flirted with young men passing by. They left the impression of being nothing but carefree, innocent travelers.

When the porter set our bags in our compartment and left happy with a generous tip, and the locomotive started to move in a cloud of hissing steam, our nerves seemed to cave in, and the girls kept a sullen silence all the way to Rostov.

Excitement returned at Rostov with renewed bantering, jokes, and high spirits. The two girls had to change trains, while Siranoush and I stayed on course. Our girl friends were on their way to the Caucasian health resorts, their bags full of all the necessary material.

On our way back to Nakhitchevan, I was curious about some details, such as: Why was the coachman so polite and friendly? Who was the woman at that modest shack? How were the bags prepared? Siranoush answered with some condescension, “Too much knowledge will make you old before your time.” She kept silent until we reached the house where she stayed, in the Surb Astvadzadzin quarter of Nor Nakhitchevan.

We had a few more similar trips to Slaviansk, Yuzovka, Briansk, etc. Bags full of weapons and ammunition kept flowing to the Caucasus from all locations. The first station was Baku, from where they were distributed in various directions, ending up in Vaspurakan, Taron, or Mountainous Armenia.

In general, we handled our task with success. Naturally, certain mishaps and accidents were inevitable, yet our security was never compromised. One incident, however, is worth mentioning.

I think it was in Luganski, where some ammunition for Mauser pistols were still in storage. There was an urgent request from Voskanapat to transport the lot by our own means, since they had sent no one from Baku. Siranoush and I were to depart in the evening, spend the night in Luganski, and return to Rostov with the morning train. This was to be our last mission, after which Siranoush was to return to Baku.

The trip was uneventful. We picked up the merchandise—one small and two large bags—in the morning at a confectionary owned by an Armenian, and took off in a carriage for the station, where everything went smoothly. We left the two large bags in consignment with the porter and kept the small one. After our morning tea, we stepped out for a stroll. Our train was late, and we had to pass the time somehow.

We were walking slowly back and forth on the long sidewalk of the station, lost in conversation, when all of a sudden Siranoush whispered, “Be careful, the ‘archangel’ has spotted us!”

At the entrance of the station, under the bell, stood the gigantic station guard following our every move. Siranoush started telling an amusing story punctuated with loud giggles, to which I answered with my own animated chuckles—we were a young, carefree couple waiting for the train to arrive.

My cursed handbag was heavy, so, not to look suspicious, I was playing with it, swinging it up and down, as if it were light as a feather. Let the “archangel” see that we had nothing suspicious with us…

Suddenly, as we were passing in front of the guard, because of a clumsy move I made, the bag fell out of my hand, the cover flew open, and the Mauser cartridges spilled on the sidewalk…

A terrible, unthinkable situation ensued. Petrified, Siranoush froze in her tracks. Not quite aware of what I was doing, I leaned over and started to retrieve the cartridges. Like a hunting dog that smells big game, the “archangel” approached with leisurely steps and, grabbing me by the neck with his huge paw, raised me up.

“Eto shto, golubchik?” (What is this, my dear?), he said in a mellow voice, staring at me with derision.

Oblivious of my surroundings, I mechanically bent over again and slipped in the bag a red 10-ruble banknote. The guard looked around quickly. There was no one in sight. The street facing the station was deserted. He crumpled the banknote in his hand, straightened up smiling, and said “Malo” (Not enough).

“You’ll have more,” I answered flustered and, picking up the scattered cartridges, shoved them inside the bag. The guard was now helping me push the stray ones towards my hand with his foot, looking around furtively at the same time.

Siranoush stood motionless, silent, as if not there. The “archangel” took the bag and returned to his spot, under the bell.

It was hard to tell whether he was mocking or threatening me. I was in the state of a mouse caught in the claws of a cat.

I produced another red 10-ruble note. He snatched it fast and again: “Malo!”

I added a five-ruble note. He chuckled, satisfied.

He shoved the bag against the wall with his foot, and said in a carefree tone: “Now, go have a good time, until the train arrives.”

Siranoush was still standing motionless. I approached; she was in a sad state. We hardly started to exchange a few words when we heard the train’s whistle. I hurried to find the porter, who soon showed up with the bags.

The train arrived and stopped in front of the station, hissing. Travelers started milling around. Our friend, the guard, followed us with my bag in hand, helped Siranoush up the steps, and, handing me the bag, said out loud: “Sbogom. Schastlivogo budi” (God be with you. Pleasant trip), as if he wanted people to think that we were friends.

When we were finally settled and the train began to move, Siranoush covered her face with her hands and, trembling, muttered something I couldn’t make out. Was she crying or chuckling? She was doing both, it seemed. It was a cry, and laughter, of freedom…

That was our last trip, and my last time with Siranoush. If I am not mistaken, Siranoush Shahgeldian was one of the victims of the Baku massacres, martyred at the hands of the Turks.