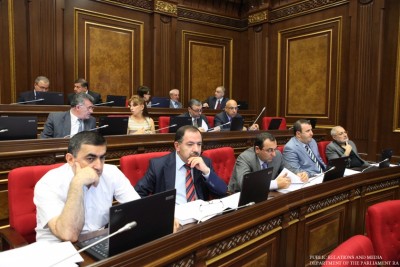 According to a1plus.am, on November 28, the ARF-D Parliamentary Faction applied to the Parliament’s Committee on Ethics calling for a scrutiny of the failure to have a quorum and hold the November 21st extraordinary sitting. ARF-D cites article 6.1, subsections a, c, and f of paragraph 2, of the Rules of Procedure of the National Assembly. Attached was also a list of the MPs who were absent from the sitting. According to the Committee’s rules, in the next 10 days after receipt of the application the Committee must convene a closed-door session and decide whether to accept and proceed with the demand or decline it. ARF-D believes that the violation of ethics was expressed with the MPs absence from that very sitting, pastinfo.am reports.

An extraordinary meeting of the Plenary was called for November 21, upon the initiative of the opposition parties ARF-D, Prosperous Armenia (BHK), ANC (HAK) and Heritage (Zharangutyun). As it was expected, the ruling party (HHK) deputies weren’t present and so the necessary quorum was not provided. Therefore, the discussion over draft laws “On Amending the RA Electoral Code”, “On Amending the RA Law on State Register of the Population” and “On Amending the RA Criminal Code” wasn’t held.