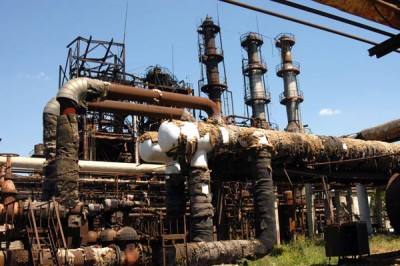 (Asbarez, December 3) – Hundreds of employees of the Nairit chemical plant, one of the largest industrial plants in Armenia, protested in front of the presidential palace on Baghramyan Street last week. They weren’t demanding pay increases or assurances for workplace safety; rather they were demanding something which the majority of us take for granted – their salaries. Some employees haven’t received wages for almost a year.

Nairit, which produces synthetic rubber and is the sole producer of chloroprene rubber in the CIS has had its share of troubles, both environmental and financial, since its creation almost 70 years ago.

In 1933, the Council of People’s Commissioners of the USSR ordered Narkomtyazhprom (People’s Commissariat of Heavy Industry) to start the construction of a plant in Yerevan for the large-scale production of chloroprene rubber from calcium carbide (www.nairit.am). This relatively cheap-to-produce synthetic rubber was a vital component for the country’s military-industrial complex.

Construction of the plant began a year later and was completed by 1936. In the initial years of production, Nairit’s capacity for calcium carbide production was 20 thousand tons a year; by 1987 it was producing over 75 thousand tons of synthetic rubber annually. But it was also responsible for discharging over 23,000 tons of noxious chemical pollutants into the air making it one of the most toxic plants in the region.

Nairit, the Metsamor Nuclear Power Plant and other industrial plants in Soviet Armenia had been wreaking havoc on the environment, poisoning the atmosphere and were deemed responsible for the increase in birth defects. Even as early as the 1950s the public health commissioner of Armenia SSR had called for the relocation of Nairit and other industrial plants out of highly populated urban areas, a call that never materialized. Nairit, covering an area of almost 200 hectares was a labyrinth of hazardous smokestacks, rusting pipes and foul-smelling toxic pools. Metsamor and Nairit became the focus of the emerging environmental movement of the 1980s, helping form the basis for the Karabakh movement to come soon after and eventually spearheading the irreversible transformation of the Soviet Union.

After much public pressure and documented health risks, Nairit was finally closed down in 1989, yet was reopened in 1992 due to economic reasons. The newly independent Republic of Armenia, under severe pressures as a result of the Karabakh war, the blockade, the energy crisis needed the income from the foreign sales of Nairit rubber and chemical products.

Since 1992 the Nairit Plant has passed through several hands when it was finally sold to Rhinoville Property Limited Company in 2006, with the Armenian government holding a 10 percent share in the plant. After Rhinoville defaulted on its loan to the CIS Interstate Bank, the stock of Nairit was transferred to the bank in the early part of this year.

There has always been controversy surrounding Nairit, from mismanagement, to allegations of corruption, collusion, explosions, fires and temporary shutdowns.

In 2006, reservoirs of ethanol waste caught fire, which raged for days before firefighters could quell the fire; in 2008 the plant announced a temporary shutdown due to the economic downturn and falling global markets leaving over a thousand people without employment and then in May, 2009 several explosions rocked the plant, killing four employees and instigating a criminal investigation for gross violations of safety standards.

Employees of Nairit, working oftentimes under difficult and unsafe conditions, continued to fulfill their duties, without receiving payment. A question arises – why did they continue working for months when they weren’t being compensated?

The reality is a reflection of the current situation of the labor market, working relations and conditions, weaknesses in the Labor Code, ineffective trade unions and prevailing employer-employee attitudes in the country.

Employers, understanding the volatility of the labor market and people’s desperation to maintain their employment status, violate workers’ fundamental rights. These might include denying their right to paid vacations, forcing them to work longer hours without fair compensation and the illegal suspension of labor contracts. There are also many cases of non-payment of temporary disability benefits and salaries in the service and construction industries where workers do not have a work contract.

State control over the rights of workers is assigned to the State Labor Inspectorate (SLI), which falls under the Ministry of Labor and Social Affairs. The SLI supervises the enforcement of those legal acts by employers that regulates labor relations. Trade unions represent and protect labor, which they often fail to do in Armenia. Much has to do with their Soviet legacy when trade unions were mostly formal in practice and their sole mandate was to collect union fees and regulate vacation periods. Recent studies have shown that workers in Armenia today are poorly informed about their rights and most don’t even know about the existence of trade unions.

According to the International Trade Union Confederation (ITUC), while Armenia has ratified all eight International Labor Organization (ILO) Core Labor Standards Conventions, most workers are still unable to exercise the right to unionize and collectively bargain due to the restrictions of the Labor Code and the government’s tolerance of the very high level of informal employment relationships and also because of the crippling high unemployment rates which continue to persist.

According to the Trade Unions Confederation of Armenia (CTUA), which includes 24 unions with over 230,000 members operating in various sectors and industries, from January to October 2012, only three employees took legal action against their employers with the assistance of the CTUA with claims of abuse of their labor rights. CTUA annually receives about 80-100 written and 300 oral complaints by employees. Statistics from the past five years has seen a decrease in complaints and the reason for this is the high level of unemployment and the workers’ fear of losing their jobs.

At the protest in front of the presidential palace, Hratch Tadevosyan, head of the trade union of Nairit employees received promises from the president’s office that employees would be compensated for three months of pay by January 2013. Time will tell if this promise will be fulfilled.

This latest battle between Nairit employees and the plant, speaks to the heart of labor relations, employee rights and an absence of a social contract in the country. While the government continuously promises to intensify efforts to expand local industry, with very little results, one is left wondering that under current labor relations, if Armenia was to miraculously transform its economy and increase its manufacturing capacity, create opportunities for foreign direct investment, thereby expanding the industrial sector, what guarantees would there be to ensure the welfare of an increased labor force. We must ensure that employee rights are protected by law and the adherence to the law.

It is imperative that all citizens of the Republic of Armenia be aware of their rights and that includes all aspects of their human rights, from the right to dignified employment, to the right to dignified housing. As long as vast swaths of society are kept in the dark, either intentionally or through poor state mechanisms to properly inform them, then employees like those at Nairit will continue to work under unsafe conditions, with no pay and very little hope for the future. Just as an informed electorate is the lifeblood of a democracy, so too is an informed labor force the lifeblood of an equitable economic system.

Where governments and trade unions have failed, the burden must fall once again on the shoulders of civil society in Armenia to inform, educate and assist workers to ensure their rights are upheld. Article I of the Armenian constitution states that “the Republic of Armenia is a sovereign, democratic, social state governed by the rule of law.” By definition, a social state means a social system where the state takes on the primary responsibility for the welfare of its citizens. The rule of law means the supremacy of law, which means that all persons, individuals and governments, are subject to law. It’s time to begin from Article I.

Maria Titizian currently serves as Director of the Hrayr Maroukhian Foundation in Yerevan.