Following the XXIV Congress that took place in Cape Town, South Africa last September, the Socialist International held the first meeting of its Council, in Cascais, Portugal, from 4-5 February and discussed mainly about organizational issues. The event was hosted by SI member the Portuguese Socialist Party.

Chaired by George Papandreou, SI President, former Prime Minister of Greece, former President of PASOK party and by Luis Ayala, SI Secretary General, the Council addressed the following dimensions of the main theme: “The Eurozone Crisis: From here, which way forward?” and “Emerging and Developing Economies and Multilateral Institutions in an ‘Out of Crisis’ Strategy”.

In light of recent events, two emergency items were added to the agenda:“Latest developments concerning the efforts of the people in the Arab World to advance the democratic agenda”, on which key actors from political parties and movements active on this issue made presentations to the Council; and, “Mali: Supporting peace, security and democracy in the Sahel”.
The Council meeting established the different organs of work of the Socialist International for the new period. These included special SI Commissions, regional and thematic Committees, Working Groups and Campaigns launched.

Speeches were given by delegates and guests. Resolutions and statements on the central issues of discussion were adopted at the close of the meeting.
Additionally, the Council decided to re-launch the campaign for an end to the violence against women. 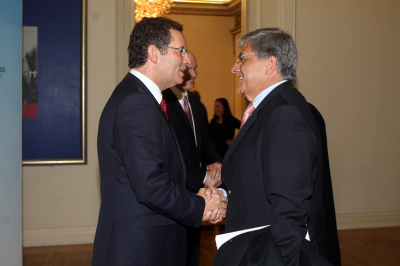 Based on the relative decision of the Presidium’s February 3 session, the Council elected the members of the regional and thematic committees, commissions, working groups and statutory committees. The Council also elected two Vice Presidents for the seats that were left vacant and decided upon membership approval or upgrading issues. The number of thematic committees and working groups was increased by the formation of new ones with objectives such as Accountability and Transparency, Political Education, Democracy and Poverty. SI Vice President Mario Nalbandian participated in the session.

Hovhannesyan was elected Co-chairman of the Committee for the CIS the Caucasus and the Black Sea, a position previously held by Nalbandian. For the first time, ARF-D was also elected member of the Statutory Committee on Finance and Administration.