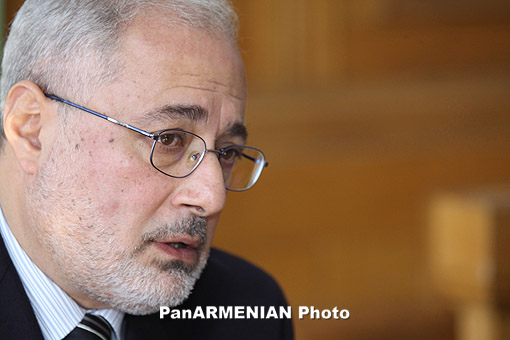 Speaking to media representatives at “Urbat” Press club, today, ARF-D Bureau member Vahan Hovhannesyan commented on a number of issues having to do with recent domestic and international developments.

ARF-D at the Socialist International Council
At the Socialist International Council’s meeting that took place in Cascais, Portugal on February 4-5, Hovhannesyan was elected co-chair of the Committee for the CIS the Caucasus and the Black Sea, a position previously held by ARF-D Bureau member Mario Nalbandian. “The voting was unanimous, there were no “against” votes, the Turkish socialist party was not present during the voting, and most probably had left the room” Hovhannesyan said. He emphasized on two facts: the admission of Georgia’s SDD party as a member with a consultative status and the loss of the Azeri socialist party’s observer status since in reality it has stopped functioning.
Hovhannesyan explained that these political families have a major role in the world. Socialist structures assist Armenia’s development but that doesn’t mean that they have to be used in order to hide the country’s defects. “I had working meetings with two leaders, from African socialist countries; they can be helpful to our state” he said.
As for the Turkish socialist party, Hovhannesyan said that he donated an Armenian language book to the party’s delegates.

The seven-point platform
According to 1in.am, Hovhannesyan said that ARF-D’s seven-point platform is still on the agenda. He stated that the process of having one oppositional candidate was derailed, the political parties didn’t show enough patience to complete the talking and then pass to the next stage which was the nomination of a single candidate.
He mentioned that many of the parties stated that they agree to the seven-point platform and announced that they were going to have their own candidate, without leaving space for another candidacy. At this point, Hovhannesyan thinks that continuing the process was made very difficult. “These polls will pass but the struggle will go on” he added. The ARF-D member believes that after the elections a new coalition government will emerge and new political accords will be sealed. “When each candidate talks about a common candidate, thinks that they will all unify under him then everything falls down the cliff. So far, no-one has offered to withdraw his candidacy for the benefit of another one” concluded Hovhannesyan.

“I don’t see an election process. All I see is incidents; the most worrying being Antreas Ghoukasyan’s hunger strike. We were right not to take part in the process. It’s a myth what they say that the ruler is as its people are. There’s nothing like that. Society is unhealthy because the ruler is so. There’s an atmosphere that forces decent people to keep a far distance” 1in.am quotes Hovhannesyan. It is an event that is called “elections” pinpointed Hovhannesyan. At this instant, they are not ready to transform it into a political process. They will only guide those who it is possible to guide, he said.

In his opinion, the way things are developing shows how right ARF-D’s position is. There is a large part that is disappointed in them because there is no reason for bribe money to be circulated. There were clans that made a living with that money. They have turned into a severe class, it’s a serious business and ARF-D doesn’t want to have anything to do with it. He also stated that he will personally vote in favor of all the candidates, since it makes no difference to him whatsoever. Asked whether ARF-D’s decision not to nominate a candidate is a slap on the society’s face, Hovhannesyan replied that society can be trained but if it has chosen the selling-out path then what else is there to do, he wondered.

As far as Antreas Ghoukasyan is concerned, Hovhannesyan said that his platform is understandable and that he feels it close to his heart. He said that apparently, Ghoukasyan with his hunger strike wants to demonstrate the unfairness of the election process while ARF-D aims at proving the same by not having a candidate of its own. Commenting on whether society is indifferent to Ghoukasyan, Hovhannesyan said that society is indifferent towards a man who is prepared to die just for the society to open its eyes. Hovhannesyan is convinced that if such an indifference exists then people must fight against it, which is a wearing-down and dire procedure with no apparent results.

Armenia shouldn’t be accused for not evacuating Armenians from Syria

In Hovhannesyan’s opinion Armenia’s authorities mustn’t be blamed for not evacuating Armenians from Syria. “In that sense, keeping Armenians in Syria is on our policy’s very base hoping that things will get a bit peaceful there. It will take a long time for full restoration of peace but at least if their physical integrity is safe then Syrian Armenians will have the opportunity to restore what it has been lost” azatutyun.am quotes. Hovhannesyan also referred to the efforts that the Armenian government has made over the last months.

He stressed that if the number of Syrian Armenians that have settled in Armenia grows even more, the assistance offered to them from the Armenian authorities will be decreased. “If today we are dealing with 8.000-10.000 people, which is already problematic for our budget then a duplication or triplication of that number would provide a totally different picture of the situation and would limit the possibility of helping all those in need” he said. Hovhannesyan who is also “Help Your Brother” civic initiative’s coordinator said that from the beginning of the year 320 families of Syrian Armenians and Syrians as well, have received a financial aid of 100 dollars.

Help will be continuous, said Hovhannesyan and explained that the delivering is the main problem. Donations that have been made to the bank account are not being transferred to Syria via the banking system but are being delivered in cash, because the Syrian banking system is almost not functional, Hovhannesyan added. “It is a very difficult process because it is linked to physical risks, nevertheless, we continue with it”.

“Help Your Brother”‘s first assistance to Syria was not financial, it was food and medication that were sent with three cargo airplanes from September 2012, said Hovhannesyan. But transportation has become not only costly but almost impossible because Aleppo’s airport has been closed down since last December. Hovhannesyan, like Jirayr Reyssian who is the spokesperson of the Armenian Prelacy in Aleppo, believe that safety is much more important than poverty. Talking to azatutyun.am, Reyssian referred to the latest killing, that of 60-year old Antranik Avedisian who died of sniper shots.