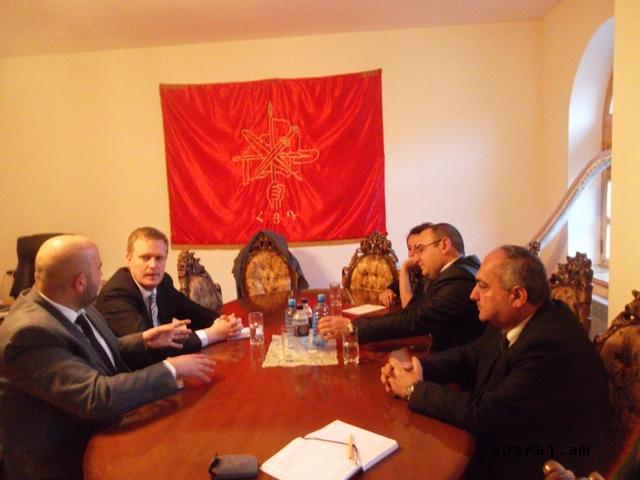 On February 21, ARF-D Mountainous Karabakh (Artsakh) Central Committee Secretary Lernik Hovhannisyan and Head of the MK ARF-D Parliamentary Faction, Armen Sargsyan held a meeting with Support Initiative for Liberty and Democracy (SILBA) Chairman and counsel to the Parliament of the Kingdom of Denmark, Jens-Kristian Lütken, at the premises of ARF-D in MK.

SILBA has been undertaking observatory missions in Ukraine, Bellarus, European states and for a year now in Armenia and Azerbaidjan.

Jens-Kristian Lütken had also meetings with representatives from political organizations of Mountainous Karabakh.

During the meeting with the ARF-D delegation the interlocutors evaluated the foreign policy of Mountainous Karabakh, political issues and matters in connection to the conflict between Karabakh and Azerbaidjan.

ARF-D Mountainous Karabakh Central Committee Secretary, Lernik Hovhannisyan noted that democracy is much more sustained and developed in Karabakh rather than in neighboring Azerbaidjan.

The Head of the Mountainous Karabakh ARF-D Parliamentary Faction, Armen Sargsyan presented the background of the liberation movement of Artsakh pointing out how that movement prevented the course of a new Genocide initiated by Azerbaidjan. Armen Sargsyan highlighted the necessity of the international recognition of the Mountainous Karabakh Republic and gave the example of how good and strong athletes from MK cannot compete in international sport meetings because MK is not recognized.

Sargsyan added that from the beginning of the 20th century Mountainous Karabakh has been a mere piece of land for Azerbaidjan while for Armenians it has been their homeland.

Lütken agreed that human rights protection must be in the center of the Mountainous Karabakh conflict resolution.