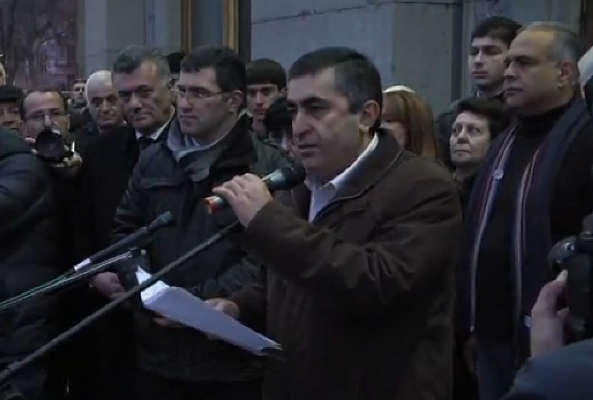 ARF-D Supreme Council of Armenia Chairman, Armen Rustamyan delivered the following speech on February 22, at Liberty Square to the thousands of Armenians that rallied to protest the vote rigging of the recent presidential election in Armenia.

I greet you on behalf of ARF-D. Your presence here is the beginning of a big task. You have done the principal part. You have overcome terror. Therefore you can do the impossible. You can reach any target.

It’s been a few days now that Liberty Square has been waiting and wanting to see ARF-D. We are here. We came to your rally. As we have already announced the ARF-D is with the people; the people who on February 18 showed that it is impossible to be broken, it is impossible to kill in them the desire for justice and freedom. The people, who is ready to fight for the future of the family and the country. The people who doesn’t tolerate the country’s existing, choking political, social, financial and moral atmosphere anymore. The people who rose against the rank and file of the ruling regime’s self-satisfied act that there is no game played against them and that they enjoy the trust and support of the society’s absolute majority. Your response was clear; this is an unacceptable situation. On February 18 you proved that the citizen of Armenia is worthy of a much better life and regime. This was a protest against injustice, despair, migration.

We have stated our evaluation about the nature and quality of the election process. Regardless of what the international organizations and observers said you were the ones participating in that election, you are aware of what took place. The will of the people cannot be stepped-over. Whoever doesn’t see, doesn’t realize what happened he doesn’t acknowledge our people, he disregards it. Sadly, that is what the authorities are doing today.

Dear people, your gathering is a movement of establishing the power of the people and that movement has to meet its end. This is a difficult and long task, a task that demands intellect and work. There are no easy ways. But if you are determined, if you are unified, if you are ready for the fight then victory won’t be late. In this election, the people saw hope which was embodied by Raffi [Hovhannesyan].

Raffi has met with us. We discussed about the situation. We are in favor of taking the lawful and constitutional path and reaching real and tangible results. This situation must also force the ruling power to find ways out. Our country needs radical reforms.

The ARF-D is by itself a responsible political party. We have our political agenda. We will be resolute and consistent. I repeat this is a movement in the name of each citizen of Armenia. [It is] In the name of the future of Armenia. In the name of Artsakh. In the name of bringing together in one place, the forces of the Armenians. We don’t see enemies on the inside. We want our people to live a good and decent life. We want a Free, Fair, Democratic and Powerful Armenia.

And we will have that Armenia.