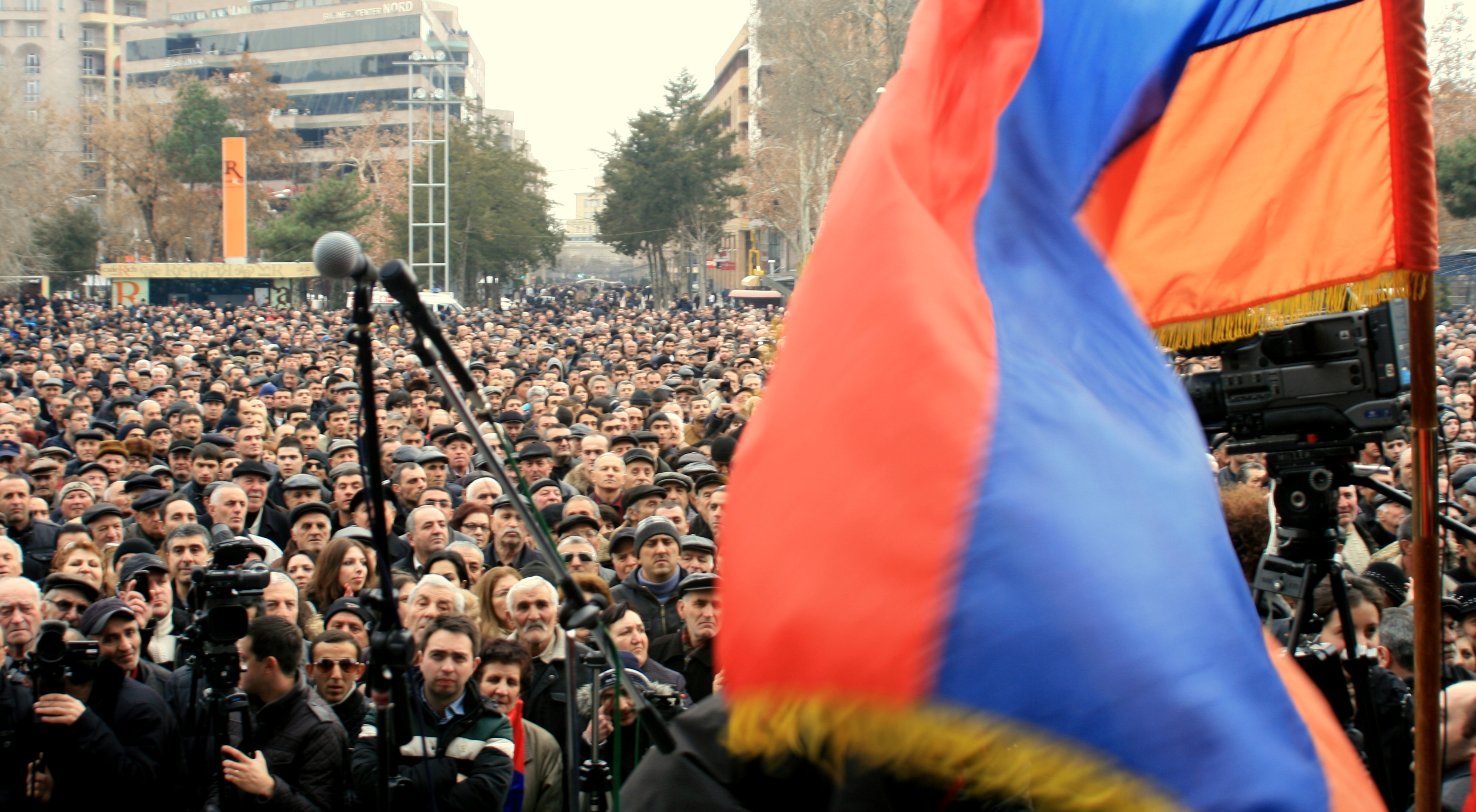 Rustamyan: We should not get disheartened if we cannot achieve regime change right away. We can attain that goal gradually. (Photo by Khatchig Mouradian, The Armenian Weekly)

YEREVAN (armenianweekly.com)—Armenian Revolutionary Federation (ARF) Supreme Council representative Armen Rustamyan laid out his party’s vision for the post-election popular movement in Armenia by stressing the importance of securing a victory at the Yerevan municipal elections on May 5, 2013, as a stepping stone towards achieving regime change.
Speaking at a rally on Freedom Square on March 5, Rustamyan noted that the authorities will not willingly compromise, let alone concede power. “Only a popular movement that transforms into a powerful political factor can force them to do that,” he said.

According to Rustamyan, The final objective of the movement is to guarantee that the people assume power on all levels. That objective can best be attained through persistent struggle, by securing a series of victories. We should not get disheartened if we cannot achieve regime change right away. We can attain that goal gradually, he noted, adding that every single person in the movement will have to work towards that goal.

Rustamyan concluded by saying that securing a victory during the May 5 municipal elections in Yerevan constitutes the first step. In a country like Armenia, assuming municipal power in Yerevan would be very significant and would force the authorities to make greater concessions, he argued.

Following is the full text of the speech.

Today, it is imperative to assess the main challenges that this movement faces.

-We must note that the ruling power isn’t getting ready to fulfill Raffi Hovhannesyan’s demands that aim at discharging the post-election situation.

-It was once more proven that the ruling power will not proceed to the necessary concessions willingly. Moreover, it will not grant the power.

-Only a nationwide movement transformed into a strong political factor can force the ruling power.

The task for the participating political and civic forces and for all stakeholders is organizing around clearly formed objective and principles as well as the expanding and empowering this movement with concrete steps and actions. Therefore, today’s imperative is the organizing and the channeling of a true movement.

So, the movement’s final objective which is crystal clear and unaltered, is to reach to the establishment on every level of the people’s full power. The most trusted way of getting there is by directing the movement through the channel of the long struggle which marks gradual successes. Meaning that if for now changing the regime totally and once and for all is not possible, that shouldn’t disappoint us but it should motivate us to get there gradually, stage by stage.

Thus, in order to shatter the ruling power’s autocratic and monopolistic conduct, to broaden the movement’s resources we must benefit fully from every single opportunity and possibility so we can deliver concrete and tangible results. And that cannot be considered a deficient endeavor. It is exactly this kind of gradual successes that will bring the movement step by step closer to its pursued objective.

This is a wide-front struggle, starting from each building, neighborhood, district, city until the highest levels of the Republic. And it is within this struggle that each and everyone of us will see its place and role, each and everyone of us will have his own task. This struggle will lead to a regime change that will be total, that won’t end with the mere changing of faces which we have seen many times before, [a struggle] that will truly establish the power of the people and will guarantee the realization of radical reforms in the country.

The ARF-D has proposed such a plan of prioritized steps and we are convinced that our full potential is necessary in order to achieve its implementation. However, to secure such a long and tenacious public struggle first and foremost we need to shape the movement’s backbone and organizational structure beginning from the central leadership until the forming of the subdivisions of the districts and communities.

A movement formed and organized in this way and acting with a “soft power” logic will get more and more impetus, will become unstoppable and will certainly realize its objective and all of us will live in the Armenia of our dreams.