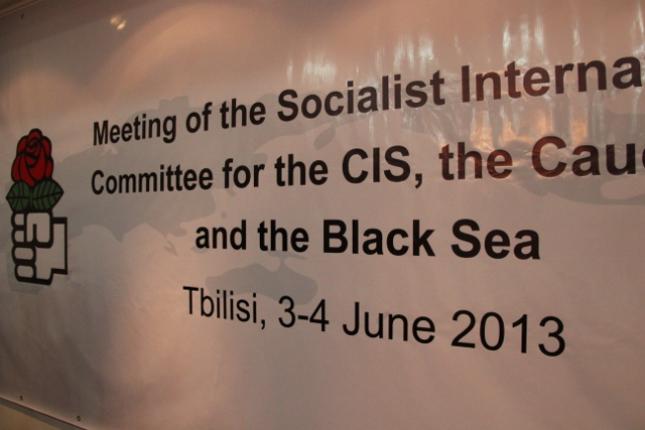 On June 3-4, 2013, the Social Democrats for Development (SDD) party of Georgia hosted the Socialist International’s Committee for the CIS, Caucasus and Black Sea meeting in Tblisi.
The meeting was co-chaired by Vahan Hovhannesyan from the ARF-D and Alexandra Dobolyi from the MSzP of Hungary, co-chairs of the committee, and vice-chair Oleg Tulea, of the PDM, Moldova. The ARF-D International Secretariat Director, Giro Manoyan was also part of the Armenian delegation.
The committee discussions were focused on the following agenda: a) Defining current priorities and tasks for social democracy in the CIS, Caucasus and Black Sea region, b) Challenges to succeed in winning the battle for democratic states in the region, c) Overcoming conflict – a fundamental need on the road to a fair and prosperous society, d) Brief reports on the national situation in countries of the region, e) Programme of work of the committee for the current period, f) Conclusions and adoption of a Declaration of the meeting.

The Socialist International member parties from the CIS, Caucasus and Black Sea, gathering in Tbilisi on 3-4 June 2013 to define priorities and challenges to social democracy in the region, reaffirmed, in the first instance, their unwavering commitment to preserving the unity and integrity of this global political family following recent initiatives by our members in Germany and their statements which appeared in the press. The members of the Committee take this opportunity to declare themselves fully represented by the contents of the Open Letter issued by the President and Secretary General of the Socialist International in response to those developments.

We underline that international Solidarity, the core of our social democratic identity, must be preserved and strengthened. The countries of this region, although different socially and culturally, and which are presently at varying stages on the road to securing, improving or consolidating democracy, nevertheless share many common problems. Coordinated action at regional level is crucial, and we are committed to redoubling efforts in pursuit of democratic governance, solidarity and equal rights for all.

The Committee noted, in the case of Georgia, that there is a sensitive process of transformation underway after the changing of government by elections, and it is hoped that the process of the restoration of justice will be transparent and effective. We hope that the political system will become more representative and democratic. Steps taken towards the achievement of universal education and healthcare, for poverty reduction, for the development of the village and labour relations in Georgia are welcome.

We also welcome the politics of the Georgian government devoted to peaceful and democratic development in the region, and its efforts for the advancement of Georgia-Russian relations in a civilised framework.

Peaceful politics in the region and among the neighbours is of paramount importance, and only the peaceful resolution of conflicts in the region must prevail.

The Committee fully supports the peaceful resolution of the regional conflicts based on the principles of international law.

The Committee expresses deep concern over disproportionate and excessive use of force by the police against citizens exercising their right to free assembly in Turkey. We would like to remind the Turkish government that freedom of expression, freedom of assembly, and the right to have peaceful protests are fundamentals of a democratic regime. We observe with great concern the rise of authoritarian inclinations in Turkey, and the ensuing apathy towards citizens’ legitimate grievances. We call upon the Government to show constraint and respect human rights and freedoms. The Committee offers condolences for those who lost their lives during the protests and wishes a speedy recovery for the injured. The SI will continue to be in solidarity with the Turkish people and the Republican Peoples’ Party, CHP, in their struggle for rights and freedoms, democracy, and social justice.

In Ukraine, the political process has shown that attempts by Victor Yanukovich to return to authoritarianism  have no place and no support in society. At the same time, right-wing opposition is unable to propose a credible alternative to his course and is increasingly losing popularity among the people. Because the main forces both in power and opposition in fact are isolated not only from the reality of the people but also from the fight for democracy and fairness, they are becoming isolated in politics. Just as the SI was the first organisation to support the struggle of the Ukrainian people for freedom in 2004, it now supports the efforts of Ukrainian citizens fighting for justice against oligarchic groups from both ruling political sides.

The Committee reiterated its full solidarity with the people of Belarus in their struggle for freedom, democracy, independence, and the preservation of their national identity. The continuing serious violations of human rights by the ruling regime is deplorable and this Committee calls for an end to the persecution of opposition leaders and for the liberation and rehabilitation of political prisoners, among them Mikalai Statkevich, leader of the BSDP (NH), a member party of the Socialist International.

The Committee supports the activities of its member party in Kazakhstan, the Nationwide Social Democratic Party, OSDP, in its efforts to promote social democratic values in the region. It welcomes the adoption by the OSDP of a new programme, “Social Democracy – the way of the XXI Century”, and the strategy of the party with regard to the expansion of its social base. The Committee also expresses its full solidarity with the party in its struggle for the country’s political modernisation, and for making this irreversible.