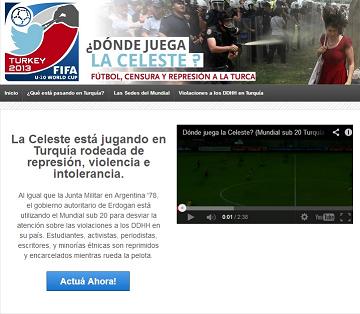 On the occasion of the FIFA U-20 World Cup taking place in Turkey, the Armenian National Committee (ANC) of Uruguay launched a campaign called “Where does La Celeste play?” (www.dondejuegalaceleste.com) to draw attention on human rights violations in the country; among them the ongoing denial of the Armenian Genocide.

Reminding the public how the 1978 World Cup was used by the Argentinean military regime in order to divert attention from the extensive human rights violations against its own people, the ANC of Uruguay highlights the Taksim Square protests and the brutal police reaction. There is also a reference to the Armenian Genocide.

The ANC web campaign was launched on June 24, the day of Uruguay’s first match and the country’s press and electronic media have already referred to it and have conducted interviews with ANC Uruguay representatives.