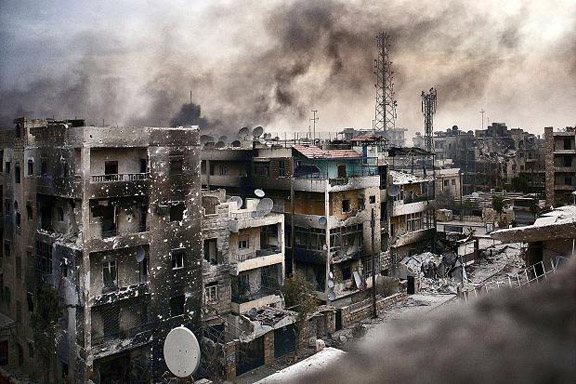 The ravaged city of Aleppo is home to a large community of Armenians.

(asbarez.com) —The closure of roads to and from Aleppo is threatening severe shortages of supplies and worsening living conditions in this highly-Armenian-populated city as the Syrian crisis continues to worsen.

Reports indicate that constant security concerns in Aleppo have been compounded in recent days by the closure of all access routes to and from the city, which is preventing emergency and relief services from providing basic needs to the population there, reported Yerkir Media.

The three basic necessities, food, fuel and medication are in severe shortage and if available are extremely expensive.

Reports from Aleppo paint a grim picture of shortages of mainly flour, forcing most bread bakeries to shut down. The cost of fuel has risen to 10 times the market price, causing daily traffic to dwindle.

Locals fear that the crisis will further impact the Syrian currency, the lira, which has already fallen in value since the beginning of the crisis in 2011.