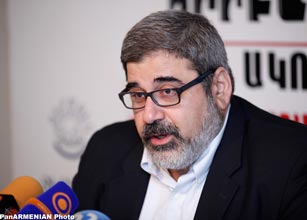 (aravot.am) – “No. I think Aliev needed Putin’s support more than any other political figure in Armenia. Putin understood it and tries, so to speak, sell at a high price to Aliyev, and generally Azerbaijan”, – so answered the head of Armenian Cause Office, ARF Giro Manoyan to the question of Aravot.am, responding to the observation whether based on the demonstrative aspects of the visit of RF President to Azerbaijan, it is possible to say that Aliev was more successful than Serzh Sargsyan, as he received Putin’s support.

We noticed that the presidents of Armenia have always received the baptism of the political leadership of Russia, and they did not even hide it, moreover, at the time of the presidential elections in Armenia, rumors were spread about the visit of the President of Russia to Armenia, Mr. Manoyan countered that this is the evidence of the fact that the President of Russia is more obligated to Armenia and the Armenian people than Azerbaijan and Azerbaijani people. “This should be considered as a direct intervention if he had done something like that with us. I think it would have more negative consequences than positive.”

To our question whether this visit is a message in terms of Karabakh conflict settlement, Giro Manoyan answered, “I still do not know what they will speak or what they will publish from their conversations, at least with regard to Karabakh, or what they will sign. I do not think that they will sign something with regard to Karabakh. But, to my thinking, this visit will not have real effect, real outcome on the Nagorno-Karabakh conflict settlement. I do not think that RF is willing to see Karabakh issue settled as of today. RF wants itself to have an impact on the region, and this visit should be looked at in this frame, although this is not a conduct expected from the strategic ally. Although there is no violation of the legal provisions of the strategic alliance, but as a conduct, it is not expected. However, we must not make a tragedy out of it.”