(ISTANBUL – Hürriyet Daily News) Giro Manoyan, director of the international secretariat of the Dashnaktsutyun, says Turkey’s consideration on reopening railway between Turkey and Armenia is aimed at ‘opening a position in negotiations with Azerbaijan.’ Manoyan was in Istanbul to attend the Socialist International meeting.
Hüseyin Hayatsever
[email protected] 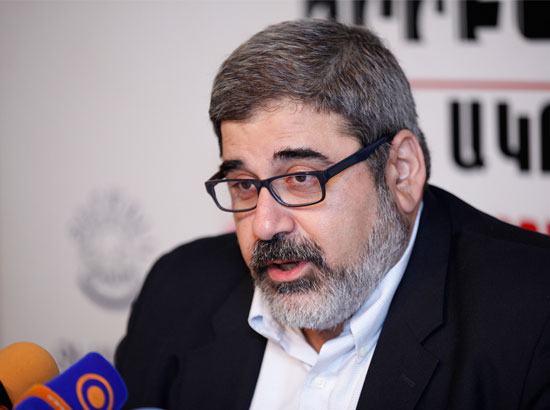 Turkey’s consideration about reopening the railway between Turkey and Armenia aims at “opening a position in negotiations with Azerbaijan,” according to Giro Manoyan, director of the international secretariat of the Dashnaktsutyun, or the Armenian Revolutionary Federation (ARF).

“I believe Mr. Davutoğlu’s announcement was more like a negotiation position with Aliyev, rather than with Armenia. I’m not sure what Turkey is expecting from Azerbaijan, but I think Mr. Davutoğlu’s not so secret announcement, which was made during a closed door session in Parliament, was actually made public for the Turkish side to have a sort of opening position in negotiations with Azerbaijan,” Manoyan said on Nov. 12 in an interview with the Hürriyet Daily News.

Manoyan was in Istanbul to attend the Council Meeting of the Socialist International (SI) to represent the ARF-D, which is the opposition party in the Armenian Parliament, holding 5 of 90 seats. He was commenting on recent news reports that Turkey is considering reopening the Kars-Gyumri section of the Kars-Gyumri-Tbilisi railway line, which has not been operational since 1993, when Turkey closed the border with Armenia, amid its war with Azerbaijan for Nagorno-Karabakh.

The idea to reopen the railway came as a question to Foreign Minister Ahmet Davutoğlu during a closed-door Parliament briefing on Nov. 6. The minister said opening the border with Armenia and reopening the railway could be brought to the agenda under the framework of a peace plan that includes the resolution of the Nagorno-Karabakh conflict.

Rapprochement between Turkey and Armenia stopped after signing the protocols in 2009, and there is nothing that has happened since then, Manoyan said. “So I don’t think what Mr. Davutoğlu said has anything to do with reality.”

“Consensus for moving on from recognition efforts”

Manoyan, who is also a member of the “State Commission for the Coordination of the Armenian Genocide Centennial Activities”, expressed his views on 2015 preparations. “There’s certain consensus among the Armenian community that they should move on from efforts to push Turkey to recognize the 1915 killings as genocide for the 2015 centennial campaign,” according to Manoyan. “That doesn’t mean there should be no recognition effort,” he maintained, adding that they “should go further and start presenting claims regarding Armenian rights.”

“Discussions, studies are going on regarding what reparation claims should be made and there’s some approach that regardless of whether Turkey recognizes the genocide or not, there are certain claims which can be made against Turkey as a state or those who have benefitted from Armenian properties etc.,” Manoyan said.

In further comments on protocols signed between Armenia and Turkey in 2009 in an effort to normalize the relations, Manoyan reiterated his party’s position and suggested that Armenia should withdraw its signatures because “it has already given too much to Turkey.”