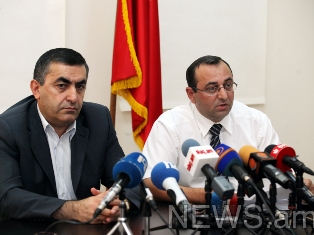 “Until now we have worked on building solidarity between the generations. It has been a moral value for the child to tend for his father who has tended for his when he was a child. We are now resigning from this legacy. We are cutting our nation off its tradition and its roots. This cannot fit in our vision of national or democratic norms; it is incompatible with our mentality” said the Head of the ARF-D Parliamentary Faction, Armen Rustamyan to media representatives on November 15, commenting on the pension system reform, news.am reports.
Rustamyan added that the system proposed by the government is incomprehensible, has no perspective, contributes to emigration and attacks the youth.
As for the boycott of the coalition parties of the November 15 extraordinary discussion, initiated by the ARF-D, about the mandatory component of the pension system reform, Rustamyan said that the ARF-D was ready to present its arguments against the reform but the coalition parties chose the easy way by abstaining from the discussion “because they [coalition parties] know that they have nothing to say”. Rustamyan reassured that the ARF-D will use all means to prove that the pension system is unconstitutional and to stop it from being implemented.
Asked about the 2014 state budget, the ARF-D member said that it is “insufficient”. The draft budget has only two positive points: the creation of unified system to raise salaries and the rating policy in the education field.
Yerkir.am reports that ARF-D Parliamentary Faction member, Artsvik Minasyan criticized the government for having adopted non social, non liberal but circumstantial approaches since there is no system of values in the regime’s social-economical policy. Minasyan said that unfortunately the ARF-D couldn’t find other positive aspects in the draft budget other than those mentioned by Rustamyan. According to opinion polls, 60% thinks that the government hasn’t taken any efficient measures, “that should worry the regime not the opposition” said Minasyan adding that in similar cases the government either has to resign or a new government must be reshuffled.

(azatutyun.am, RFE/RL) 15.11.2013 – The ruling Republican Party of Armenia (HHK) thwarted on Friday an opposition-initiated parliament debate on the government’s controversial reform of the national pension system fiercely opposed by many young and well-paid professionals. 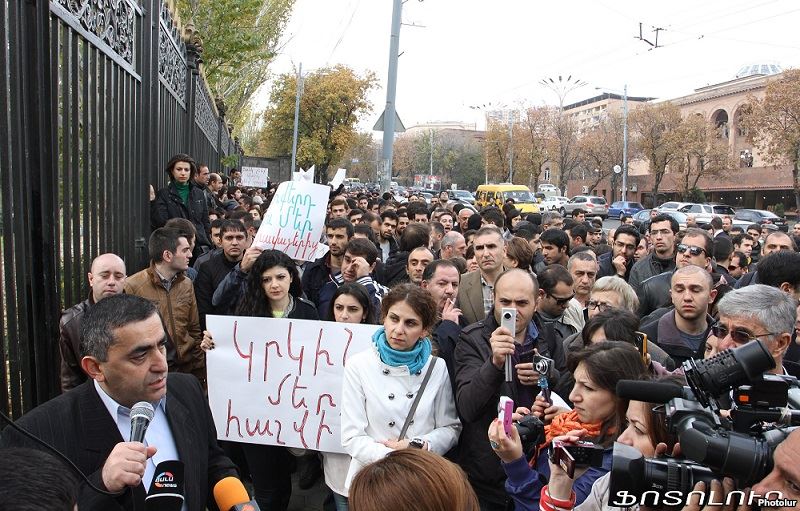 Under a reform plan approved by the government years ago, Armenia has been gradually switching to a new system whereby the amount of monthly benefits paid to retired citizens will depend on their and their employers’ lifelong contributions to the fund. The existing pay-as-you-go system essentially does not differentiate between pensioners’ employment histories. The authorities in Yerevan say it is not sustainable because of the country’s aging population.

The pension reform is due to be essentially complete with the entry into force on January 1 of a set of legal amendments approved by the Armenian parliament earlier this year. They stipulate, among other things, that working individuals born after 1973 will have to transfer 5 percent of their income to state or private pension funds in addition to social security taxes paid by their employers.

This clause is causing growing protests from some categories of the population, notably white-collar workers employed in Armenia’s information technology (IT). Using online social networks, they have launched a campaign against the reform which they say will unjustly cut their wages without guaranteeing them decent pensions in the future.

Armenia’s three main opposition groups as well as the opposition-leaning Prosperous Armenia Party (BHK) have added their voice to these objections, saying that the authorities should at least delay collection of the 5 percent tax until the end of 2014. They say the reform is not only unfair but also unconstitutional.

The debate did not take place, however, as the National Assembly failed to make a quorum due to the absence of the HHK deputies making up the parliamentary majority. The opposition minority was quick to condemn the HHK boycott as a “blatant disdain” of the Armenian constitution.

“Whatever they will say, this means one thing: they don’t consider their arguments substantiated,” Naira Zohrabian, the secretary of the BHK’s parliamentary faction, told RFE/RL’s Armenian service (Azatutyun.am).

“This [government-drafted] legislative package raises many questions and, as we can see, the government and the parliamentary majority avoid answering those questions,” said Nikol Pashinian, an opposition deputy nominally representing the Armenian National Congress (HAK).

The parliament minority leaders also condemned the boycott when they addressed some 200 protesters, many of them IT specialists, who gathered outside the parliament building in Yerevan in anticipation of the debate. The crowd then marched to the HHK headquarters located elsewhere in the city center to express its indignation with the ruling party’s stance.

HHK leaders were clearly unfazed by the outcry, however, with deputy parliament speaker Eduard Sharmazanov saying that the opposition already had a chance to object to the reform on the parliament floor. “We passed this law after hearing their counterarguments,” Sharmazanov told RFE/RL’s Armenian service. “If they see any legal problems, they can go to court.”

Galust Sahakian, the HHK’s parliamentary leader, assured reporters on Wednesday that the parliament majority will not block the planned debate.