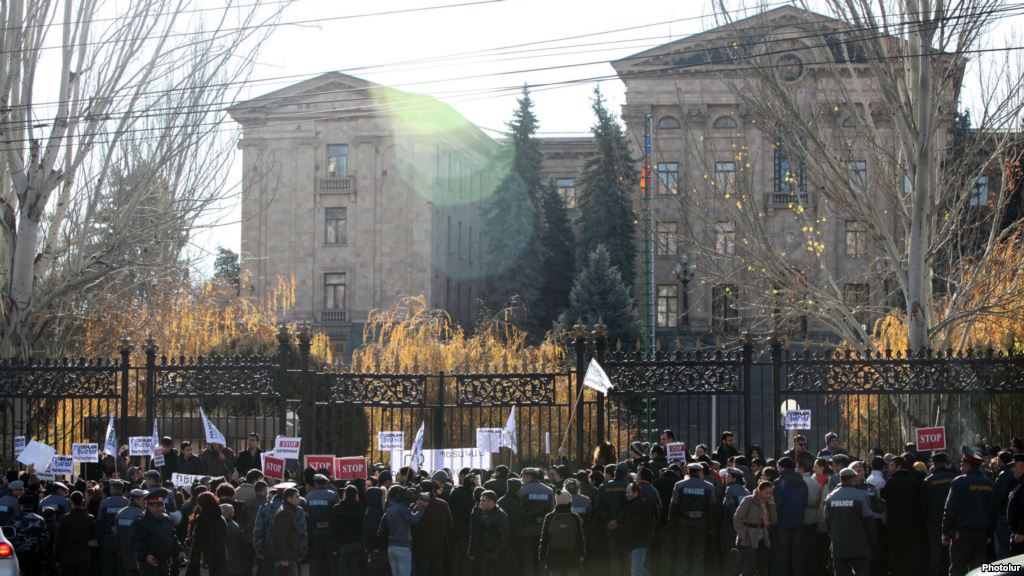 Armenia – Hundreds of people demonstrate against a controversial pension reform outside the parliament building, Yerevan, 04 Dec. 2013

(azatutyun.am RFE/RL) – The Armenian parliament rejected on Wednesday an opposition proposal to freeze a controversial reform of the national pension system that will force workers under the age of 40 to pay more social security taxes.

A bill that would delay the unpopular government measure by at least one year was narowly voted down by the National Assembly after two days of heated debates held amid street protests staged by hundreds of mostly young Armenians.

The parliament’s three opposition factions and lawmakers representing the opposition-leaning Prosperous Armenia Party (BHK) drafted the bill in a rare example of joint action. They garnered only 46 votes, with 54 other deputies mainly representing the ruling Republican Party of Armenia (HHK) voting against.

“I would suggest that you go out into the streets and explain to the thousands of young people rallying there why you voted this way. Explain the logic behind your vote to your people,” Vahan Hovannisian, a senior deputy from the opposition Armenian Revolutionary Federation (Dashnaktsutyun), told his pro-government colleagues.

The vote results sparked jeers and “Shame!” chants from several hundred people that demonstrated outside the parliament building in Yerevan for a third consecutive day. Parliament minority leaders also condemned the HHK majority as they joined the protesters moments later.

“The parliament majority has neglected its own people, but we will keep fighting,” said Artsvik Minasian, another Dashnaktsutyun lawmaker. “There will be protests, there will be strikes.”

Another opposition parliamentarian, Aram Manukian, praised the protesters and urged them to keep up their campaign. “You have united four political forces that have serious problems with each other,” he said.

The crowd chanted “Strike!” before again marching to the Prime Minister’s Office in the city’s main Republic Square. Its leaders pledged to stage more protests in the coming days.

The protesters, most of them well-paid professionals employed in Armenia’s information technology sector, want the authorities to scrap or delay the entry into force of a bill that requires working citizens born after 1973 to transfer at least 5 percent of their income to private pension funds in addition to social security taxes paid by their employers.

The measure, which is due to take effect on January 1, is part of Armenia’s ongoing transition to a new pension system whereby the amount of retirement benefits will depend in the future on workers’ lifelong financial contributions. The government says the existing pay-as-you-go system is not sustainable. Prime Minister Tigran Sarkisian made clear late last week that it will not bow to the pressure from opponents of the reform.