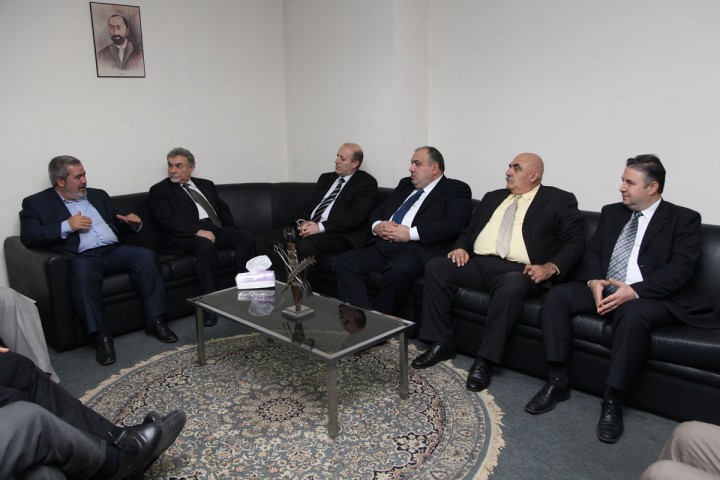 On December 6, 2013 a meeting at Tekeyan Center in Beirut, Lebanon was held between Hrant Markaryan, ARF-D Bureau Chairman, a delegation of the Hunchakian Party Central Executive headed by Hagop Dikranian and Mike Kharabian, RAG Chairman.

Below is the statement that was issued after the conclusion of the meeting.

On the threshold of the Centennial of the Genocide of the Armenians, it is more than necessary to cope with unified approaches and joint efforts the challenges that stand before the Republic of Armenia, Artsakh, Javakhk and the Diaspora.

We call our people to mark the Centennial in panarmenian volume and with joint initiatives. It is time that a new page opens for our political activities beyond recognition and condemnation. In this direction we must combine our analyses for the political and legal acquisition of our perpetual and complete rights, and we must give a push for claims to the initiatives of the State Commission of the Republic of Armenia.

We call the authorities of the RoA to fully consider the pernicious consequences of the Armenian-Turkish protocols; we call the Armenian Parliament to once and for all take the ratification issue off of its agenda; we call the President to withdraw his signature. Providing the security of Armenia, establishing democratic, social and fair institutions there, and the flourishing and strengthening of our statehood are top priorities. Furthermore, it is essential to put a stop to the emigration flow that evacuates the country and to cope with this serious danger with certain projects and on a nationwide level. We must also give a special boost to the Armenia-Diaspora relations by turning them into permanent, regulating them in the best way and by founding them on a joint process of mutual understanding and continuous development.

We must expand our worldwide advocacy and political struggle for the self-determination of Arstakh by emphasizing the recognition of the Nagorno Karabakh Republic (NKR) with its actual and constitutionally defined borders. In addition, we must motivate all those panarmenian initiatives that have a strategic significance and aim at strengthening the foundations of the statehood of Artsakh and at providing Artsakh’s economical development.

In the case of Javakhk, it is necessary that we, as a nation support the rights of the Armenians that live on their historic lands and take steps for their social-economical development. As for the Armenian Diaspora and based on its achievements of the last decades in connection to the Armenian Cause we must encourage it in demanding reparations. Parallel to its own efforts, the Diaspora needs the caring of the Armenian state so it moves forward with its important mission of keep being sustained, and of developing. As for the newly forming, non-classical Diaspora we must convey them the meaning of an organized, collective life and push them to engage into planned actions.

The Syrian Armenians’ ordeal is our own ordeal too. That vibrant community is and shall remain in the center of the attention, the caring and the assistance of all the Armenians until peace and complete restoration are established. We must prompt all Armenians, parallel to their efforts of meeting the numerous needs of the Syrian Armenians, to also strive to secure guarantees for their safety.

We strongly believe that a powerful Homeland and a committed Diaspora -as hoops that complete and invigorate one another- will restore the dispersed Armenians as one nation and the creed of a great and integral Armenia.