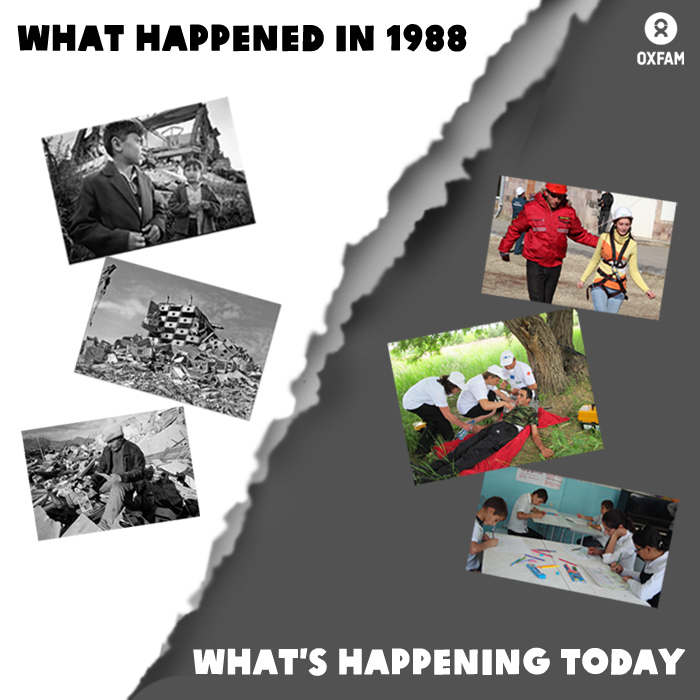 This year, on the twenty-fifth anniversary of the earthquake, a coalition of organizations came together under the auspices of Oxfam in Armenia to remember the victims of that tragedy and overcome the potential risks posed by such natural disasters.

But the horror of that day was just as much a result of human negligence as it was natural causes. International experts concluded that poor building construction, a lack of emergency planning, and inadequate medical care were the main factors behind the earthquake’s devastation.

This year, on the twenty-fifth anniversary of the earthquake, a coalition of organizations came together under the auspices of Oxfam in Armenia to remember the victims of that tragedy and overcome the potential risks posed by such natural disasters.

“I was only 13 years old and going to school in Gyumri when the devastating earthquake took place,” says Zaruhi Tonoyan, Disaster Risk Reduction (DRR) Program Officer for Oxfam. “I lost my sister that day. We walked to school together but, unfortunately, never met again.”

Mrs.Tonoyan explains that many people, whether administrators or students, simply did not know what to do back then. “By raising awareness on disaster risk reduction, you automatically protect yourself,” she stresses, “and I am thankful that, today, I can contribute to making our communities less vulnerable to natural disasters.”

On December 6, the Support to Communities NGO teamed up with Oxfam to commemorate the earthquake anniversary with an emergency drill in the Vayots Dzor community of Arpi. Working in conjunction with the regional rescue department and volunteer community emergency groups, the exercise involved the entire community in a mock earthquake scenario. Residents directly played out how they would act during such an emergency, carrying out evacuation plans, implementing first aid, assisting trapped victims, and putting out fires.

They also worked with Oxfam on a local level, especially with women and youth, to spread awareness and prepare communities to withstand natural disasters. They have organized safety seminars in schools, disseminated information, formed voluntary rescue groups, conducted simulations and worked with local governments on risk assessments and disaster management.

Other organizations such as the Armenian Young Women Association (AYWA) and Foundation Against the Violation of Law (FAVL) have also established green laboratories (houses) in ten communities throughout Vayots Dzor province: Areni, Agarakadzor, Artabuynk, Arpi, Chiva, Horbategh, Martiros, Getap, Yelpin, and Khatchik. These green labs provide a source of non-traditional, resilient crops for local communities to grow and withstand hazardous climatic conditions. A culminating event will be held on December 12 to present their crop yields and overview their activities throughout 2013.

Such climate adaptation measures are particularly important given the scale of changes to the earth’s atmosphere. As a new report by the International Panel on Climate Change (IPCC) indicates, human activity is leading to higher temperatures, rising sea levels, and a greater frequency of meteorological hazards. For Armenia—a country whose agricultural sector has been ravaged by hailstorms, floods, and mudslides—such changing conditions pose dangerous risks.

Furthermore, experience has shown that inequality greatly exacerbates the damage of disaster. The affluent tend to be protected from risks while the less fortunate often bear the brunt of natural catastrophes. It is for this reason that Oxfam and its partner organizations have worked to address the needs of the most vulnerable populations, including rural farmers, women, young people, and the elderly.

In any given year, Armenia faces a 20% chance of a major disaster. This is due not only to its location on a major seismic belt but also to its mountainous terrain. Taking preventive steps to make communities resistant against such risks is both the morally and economically right thing to do. Investing right now in proper infrastructure and risk consciousness will pay off down the line when communities are in less need of rebuilding and international disaster relief.

The 25th anniversary of the Spitak Earthquake should remind us all of the importance of being resilient and prepared in the face of natural catastrophe. If we truly want to commemorate that horrible tragedy, we should not repeat the mistakes of 1988. We should support the grassroots work being done to strengthen the capacity of communities to deal with disaster risk in Armenia while advocating on the national level to review policies and mainstream DRR procedures accordingly.