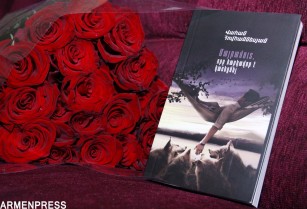 (source: tert.am) While his series of articles, “Sunset that must be suspended”, was being introduced to the reader through the newspaper Yerkir, Vahan Hovhannisyan, a long-time member of the party who served as Armenia’s ambassador to Germany in the final period of his life, would often call the publication’s then editor, Harutyun Harutyunyan, to ask, “James, haven’t they expelled me from the party yet?” Today, at the presentation of the book, comprising the late politician’s works, Harutyunyan replied to the repeated question of his friend and colleague: “You haven’t been expelled; you are being missed.”

Speaking at the event, Harutyunyan said he feels happy for not only being Hovhannisyan’s friend but also for editing the book whose publication was made possible thanks to the collaborative initiative of Yerkir, its website (Yerkir.am), the ARF-D and Yerevan’s Komitas Museum. Several copies of the book were handed over to the museum; the first copy was given to the politician’s mother.

The event was attended by ARF-D members and journalists who for many years worked with the politician, as well as Minister of Education and Science Armen Ashotyan, members of the National Assembly and relatives.

“Who is, after all, Vahan Hovhannisyan?” Harutyunyan asks in the book’s preface and replies to his own question, “The challenge of time made him go into politics, but apart from being a political figure, he was first of all a great intellectual, a historian-archaeologist, a publicist and most importantly, a wonderful friend and an ARMENIAN, whose sole desire was to have a powerful and democratic country competitive with the world.”