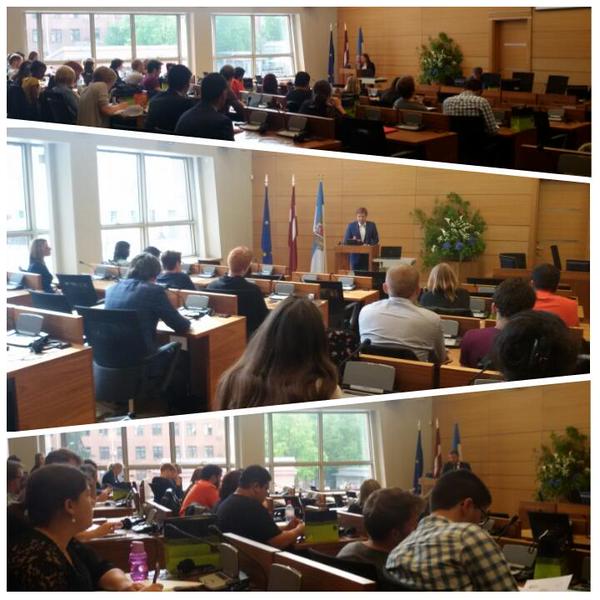 Young European Socialists (YES) Bureau meeting took place on May 29-30, 2015 in Riga, Latvia. All the full members of the organisation took part in the meeting. The Armenian Youth Federation (AYF) was represented by Aren Kerteshian (France).
The meeting’s agenda included the drawing of the action plan of the forthcoming two-year term, the discussion on the agenda of the upcoming Congress of the Party of European Socialists (PES), organisational matters concerning the summer camp, and discussion and adoption of resolutions presented by the member organisations.
AYF and France’s Mouvement des Jeunes Socialistes (MJS) introduced a joint draft resolution on the occasion of the Centennial of the Genocide of the Armenians, calling the socialist youth of Europe to recognise the Genocide of the Armenians, condemn Turkey’s policy of denial, and calling Turkish authorities to initiate the process of reparation.
The discussion of this resolution was heated and tensed. The representatives of the Youth of the Republican People’s Party (CHP) of Turkey opposing some of the points of the resolution proposed the following amendments:
– omit the word Genocide from the resolution and replace it with the word massacres, having in mind that it’s not yet clear for their party whether a Genocide was committed. At the same time, adoption of resolution such as this could harm the party’s rating in connection to the upcoming parliamentary elections in Turkey.
– omit the sentence concerning Turkey’s policy of denial, since that is offensive for their organization.
– add a point calling Armenia as well as all the states to open their archives; also calling Armenia and Turkey to bring to life a transnational commission to study the Armenian cause since historical matters should not be politicised.
Representatives of the Youth Organisation of the Social Democratic Party (JUSOS) of Germany condemned the behavior of their Turkish counterparts especially with regards to the policy of denial and stressed that what happened to the Armenians was indisputably a Genocide, that the archives of Armenia are open, and that historians have been studying those archives for the past 100 years, and that the fact of Genocide has been proven.
MJS representatives seconding their German counterparts emphasized on two issues: the forced islamisation of the Armenians and the identity crisis that Armenians face.
The Swedish Social Democratic Youth League (SSU) representatives proposed to add a clause calling YES to fight for the recognition by PES of the Genocide of the Armenians.
The representative of AYF spoke about the consequences of the Turkey’s policy of denial and expressed his regret that CHP Youth delegates were repeating the position of the Turkish authorities instead of having the courage, as young people, to call things by their proper name.
The Bureau meeting refused the amendments of CHP Youth and approved the proposition of SSU.
At the end all the delegates, with the exception of the Turks, voted for the resolution. Below is the text of the resolution.