(armenianweekly.com) YEREVAN—The Commission on Armenia’s Constitutional Reforms, which is headed by President Serge Sargsyan, released the final version of the draft amendments to the constitution on Aug. 21. The draft amendments meet 90-95 percent of the Armenian Revolutionary Federation – Dashnaktsutyun’s (ARF-D) expectations, ARF-D parliamentary faction secretary Aghvan Vardanyan told reporters on Aug. 24, when he, along with ARF-D Bureau member and head of the party’s political affairs Armen Rustamyan, gave a press conference. 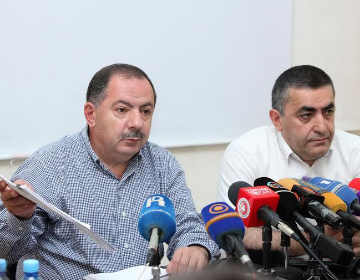 According to Vardanyan, the draft amendments incorporate some 79 fundamental and priority proposals of the ARF-D. Around 20 other proposals will be submitted soon, he said.

“We will do everything so that through the referendum, the people will accept our amendments,” Vardanyan was quoted as saying by Yerkir Media. He added that through these reforms, Armenia will be able to move in a new direction, and that he is certain that the constitutional reforms will help solve some of the existing problems in the country.

On Aug. 18, Vardanyan had said that representatives of the party would be meeting with President Sargsyan to discuss the draft of the new constitution.

“We submitted substantial proposals to the Commission on Constitutional Reforms and have discussed those proposals with the commission. I believe a discussion with the Armenian president will also take place soon,” Vardanyan told Panorama.am when asked about the ARF-D’s stance on the draft amendments.

The ARF has called for a transition to a parliamentary system of government in Armenia. Under the new system, Armenia would work with a 101-seat parliament with a 5-year term elected entirely by proportional representation. Under the current system of government, there are 131 members of parliament; 41 elected in first-past-the-post constituencies and the rest by proportional representation.

According to Eduard Sharmazanov, spokesman for the ruling Republican Party of Armenia (RPA), Sargsyan will hold final consultations with political parties that have not rejected the constitutional reforms package.

ARF-D representatives first met with Sargsyan in early May to discuss the party’s proposal on constitutional reforms. Speaking to reporters in Yerevan on March 12, Arstvik Minasyan, the deputy of the ARF-D faction of the National Assembly of Armenia, had said he was confident the president would accept the ARF-D’s proposal. Sargsyan gave his approval to the Concept Paper on Constitutional Amendments tendered by the Specialized Commission for Constitutional Amendments on May 14.