(lragir.am) Mr. Minasyan, the government has approved the concept paper on investments, in an effort to make the investment climate in Armenia favorable, it announced. What can this concept paper address? 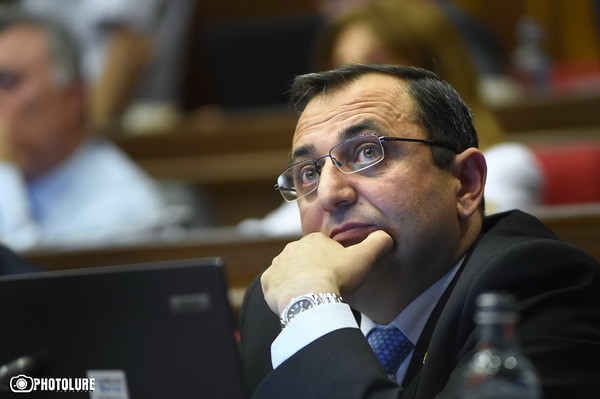 For every country, including Armenia, attracting investments should not be a one-time but a continuous process. Certainly, the steps which the government initiates are commendable but the mechanisms that this concept paper offers need a deep discussion, scrutiny and substantiation. The idea itself is attractive but when it is not specific, when it does not provide clear mechanisms, it will remain as an idea.

When I got acquainted with the concept paper, I had several questions. Firstly, the paper does not bring an innovation that has not been in our economic policy so far. Hence, it is early to describe this paper as innovative unless it does not stay at this level and is upgraded and elaborated. Secondly, the planned activities, including those relating to legislation and enforcement, are important but not complete. In particular, these activities lack steps to eliminate barriers to enforcement and a timeframe. For example, issues relating to investments and protection of investors, administrative agencies, the judicial system and in some cases artificial limitations in the economy. It mostly refers to the ban on market placement or administrative obstacles imposed in the framework of the exit strategy, hence the existence of an incomplete system of protection of investors’ rights. From this point of view, I think the concept needs a serious revision. The next issue which I saw in the concept is the long periods. The first output in the form of a legislative regulation, should be in the second half of 2016. It means that we are wasting a huge period and to expect that the full documents will be adopted only in 2017 is to postpone the solution of this important issue. I will give one example – today many are complaining of bureaucracy, the judicial system. It is possible to create a body for protection of investors, in which the representatives of non-governmental organizations, different government agencies, the key purpose of which should be fast response to complaints and difficulties.

The next issue which I noticed in the document is the lack of an idea of priority sectors for investments. The description is too general but there must be a policy of encouraging foreign and generally all investments considering the competitiveness of our economy. In this regard, there is not a clear goal which will mark the active involvement of the government, the executive, in these sectors. Such are, for example, development of hi-tech, processing industry with a view to export etc. The concept would benefit if these issues were resolved and there were a clear focus. Otherwise, the concept will be a document of nice wishes, without solutions and a clear goal.

One of the goals of the concept, aside from the fast response system, should be the introduction of a system of investment programs safeguarded by law. The government should assume responsibility in line with specific economic directions. On the one hand, this will allow considering a system of risk reduction. On the other hand, legal safeguards will be provided.

There are around 140,000 small investors in our country today, their rights are not protected. Small investors of joint-stock companies have no right to participate in the management of the company or as soon as they raise the issue of their rights, the relevant agencies advise them to go to court. Many people do not use this opportunity because it requires costs or the courts are overloaded. If the rights of small investors are not protected in the country, it is a big obstacle to the participation of foreign investors too. Let alone that foreign investors, as small investors, also encounter injustice. These are issues which, unfortunately, have not been disclosed and clarified in the concept note, and ignoring them may maintain the status quo of investments which is not satisfactory.

Hence, the concept does not contain any positive activity, does it?

There is a positive system relating to investments, the introduction of the so-called ombudsman. This has not been elaborated yet, most probably, protection of human rights is concerned. However, this system can be efficient if we have a whole system of protection of investments.

The members of government announce that this concept marks the launch of the policy of “open doors” though this policy was there but was not laid down. Can a sole document bring this policy into being?

On the other hand, specific plans of promoting local industries should be developed. The document states the objective of investment of Diaspora investments but there is no clarity that may guide the Diaspora to the economic life of Armenia though investment. There is no word on the involvement of Diaspora Armenians in the Armenian economy who have achievements and technological innovation. These are issues which must be specified by way of classification of investments in the framework of the “open-door” policy. This document does not provide that.

This year direct investments in Armenia have halved. What is the reason?

It would have been right if this document analyzed this. Let’s not forget that decrease in investments is not only in Armenia. The same is in almost all the countries in a similar situation. However, Armenia has one peculiarity. On the one hand, the entry and exit strategies for investments are not fully implemented. Secondly, we are in a region exposed to war threat, and this also hinders investments. The public propaganda is also a hindrance to the growth of investments. I am sorry that this propaganda is often used by local organizations. When speaking about one negative phenomenon or another, one actually makes the country be recognized as a high-risk area. Of course, it is very important that the officials be concerned about these issues. If the responsibility of officials is to be concerned, we as other people who have duties must recognize other people with responsibilities, demand change.

The strategic economic solutions suggested by constitutional amendments are principal to me. For example, the antitrust policy, the social, economic system, the mechanisms of protection of the right to ownership etc. Moreover, when dumping is used ousting competitors from the market, an antitrust policy should be implemented by all means. Today our constitution prescribes protection of economic competition, which differs from the antitrust policy. If this change which is provided by the constitutional amendments takes place, results will be produced shortly. Otherwise negative consequences will persist.