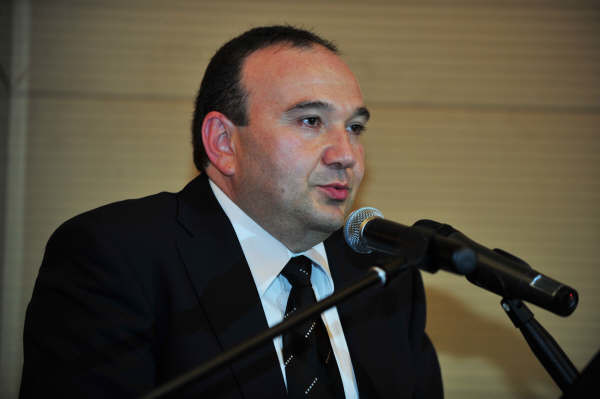 (armenianweekly.com) WATERTOWN, Mass.—“The constitution applies to everything in the country, and it should be clear why the ARF-D is backing the proposed changes to the constitution,” said Levon Mkrtchyan, a former member of the Armenian Revolutionary Federation – Dashnaktsutyun (ARF-D) Bureau and former minister of education and sciences of the Republic of Armenia, in a discussion held on Oct. 11 in Watertown. The event was sponsored by the Boston ARF-D “Sardarabad” Chapter and held at the Papken Suni Agoump.

“The first step to fixing these issues is the constitutional reforms. The economic and political system will change; the courts will be reformed. It is easy for the ARF-D to support these changes because ideologically we agree with them, and because they are ultimately important for the national security of the country.”

According to Mkrtchyan, the ARF-D believes that the new constitution has the potential to drastically improve conditions in the country. He explained how the party has always advocated for a parliamentary system of government in Armenia, which would limit the authority of the president and help create a better balance of power.

“The ARF-D has been a proponent of the changes to the constitution from the early days of independence. … Back then, our vision was rejected, and instead we had in place the constitution that we have today. … We wouldn’t have these monopolies—economic and political—if these amendments had been in place,” Mkrtchyan explained.

“Today, a president is elected for a five-year term, and during those five years, he is not really accountable to anyone. The president’s powers are vast and ultimately, he has control over many things; he is in control of the army, he greatly influences the formation of governments and the judiciary, and so forth,” explained Mkrtchyan, who said these powers would not be centralized in the hands of the president if the new constitution is adopted.

“The constitutional amendments will introduce a parliamentary system of government. The president will be elected by parliament for a seven-year term. Ultimately, the president’s powers will be limited, having a more symbolic role than anything— just as it is in Italy, Israel, and Germany, for instance.”

According to Mkrtchyan, the judiciary will also be independent if the reforms are put into place. “The 10-person judiciary, which will be elected to a 5-year term, will be completely independent. Even the parliament that forms the judiciary will not have the right to meddle in their affairs,” Mkrtchyan said. “Armenia’s citizens have constantly raised concerns that a proper and independent platform does not exist within the system, in which they can complain or protest about a given problem and where their rights are protected. The new constitution would change that,” he said.

Armenia’s electoral process would undergo “revolutionary changes” with the adoption of the new constitution. Under the parliamentary system supported by the ARF-D, Armenia would work with a 101-seat parliament with a 5-year term elected entirely by proportional representation. Under the current system of government, there are 131 members of parliament, with 41 elected in first-past-the-post constituencies and the rest by proportional representation.

“With the current [electoral] system, the people of Armenia feel hopeless, as the government does not create a way for minority or opposition parties to really have a voice,” explained Mkrtchyan, who added that the adoption of the new constitution would guarantee a “healthier” electoral system, which will not give way for “artificial majorities.”

“There are today only two or three parties in the country with real ideologies. Instead, we have parties forming around individuals, which does not allow for political parties with ideological bases to flourish,” Mkrtchyan said. “With the new system, parties will be represented instead of oligarchs.”

Another issue Mkrtchyan discussed was the population’s right to have a direct voice. With the current system, constitutional reforms have to go through parliament before being presented to the people for a referendum. “With the new constitution, once an issue gets 300,000 signatories from the people, the issue will be presented to citizens for referendum. For instance the issue of the protocols was subject to the whim of politicians. We could have gotten the signatures, and could have presented it to the people for a referendum,” stressed Mkrtchyan, who explained that this mandate can really affect the way the country is run.

Mkrtchyan went on to explain that while the decentralization of power is vital in Armenia, it must not give way to a system that makes the country difficult to govern. “As a country at war, it is important for there to be a parliament directly elected by the peoples’ votes, which will ensure the formation of governments, and in turn, the safety and stability of the country.”