(source: armenianweekly.com) YEREVAN —In its efforts to urge the citizens of Armenia to vote for the proposed constitution in the Dec. 6 national referendum, the Armenian Revolutionary Federation – Dashnaktsutyn’s (ARF-D) Supreme Body of Armenia recently published a promotional pamphlet outlining the reasons for the party’s support of the constitutional reforms, which were adopted by the National Assembly on Oct. 5 and will be voted on in the upcoming referendum. 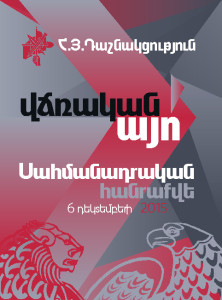 Cover of the ARF-D’s promotional pamphlet

The pamphlet, which presents some of the flaws of the current system and the advantages of the new constitution, explains that the ARF-D has supported and promoted a parliamentary system of government in Armenia since re-independence in 1991, and is supporting the proposed constitutional changes because it calls for that exact shift. According to the party, the shift to a parliamentary system will greatly benefit the future of the country.

“In the past we were not successful in realizing this [shift], and today we have the chance to do so,” reads the pamphlet. Entitled “Definitive Yes: A New Constitution, a New Beginning,” the pamphlet explains how the fundamental approaches in the proposed constitution are consistent with the ARF-D’s calls for basic human rights and freedoms and their guarantees by the governing bodies.

“A quarter century after independence was achieved, Armenia still lacks real democracy, power is hyper-centralized, the principle of the rule of law does not properly function, the courts are not free and impartial, and an effective governing system has not yet been established,” reads the pamphlet, which stresses that the constitutional reforms are necessary to create a “just, democratic, and social country.”

Opposition to the Reforms

A newly formed group calling itself “New Armenia” comprised of members of the Heritage Party and the Founding Parliament (formerly Pre-Parliament), is opposed to the constitutional changes, and is calling for a complete regime change before Dec. 6. The Armenian National Congress (ANC) announced that would not participate in discussions on the reforms. Instead, the ANC will visit cities and towns across the country to campaign against the reform.

The Commission on Armenia’s Constitutional Reforms, which is headed by President Sargsyan, released the final version of the draft amendments to the constitution on Aug. 21. The draft amendments met 90-95 percent of the ARF-D’s expectations, ARF-D parliamentary faction secretary Aghvan Vardanyan told reporters on Aug. 24, when he, along with Armen Rustamyan, an ARF-D Bureau member and head of the party’s political affairs, gave a press conference.

“We will do everything so that through the referendum, the people will accept our amendments,” Vardanyan was quoted as saying by Yerkir Media. He added that through these reforms, Armenia will be able to move in a new direction, and that he is certain the constitutional reforms will help solve some of the existing problems in the country.

The Council of Europe’s body of constitutional experts, the European Commission for Democracy Through Law, also known as the Venice Commission, unanimously approved the draft joint opinion on Armenia’s constitutional amendments during its 104th plenary session on Oct. 23-24 in Venice. Galust Sahakyan, Armenia’s speaker of the National Assembly, was present at the plenary session.

Commission members Taliya Khabrieva, Evgeni Tachev, Sergio Bartole, and Aivars Endzins “highly assessed the draft constitutional amendments, characterizing it as a document corresponding to the international standards of democracy,” read a part of the statement released by Armenia’s National Assembly.

Regarding the shift from a semi-presidential to a parliamentary form of government, the commission’s report notes that the draft amendments under consideration introduce a system wherein the powers of the president of the Armenian Republic “have been drastically reduced, and are almost only ceremonial, compared to the powers of presidents as guarantors of the constitution in other parliamentary regimes in Europe.”

In a discussion held on Oct. 11 in Watertown, Mass., Levon Mkrtchyan, a former member of the ARF-D Bureau and the former minister of education and sciences of the Republic of Armenia, said that “the constitution applies to everything in the country, and it should be clear why the ARF-D is backing the proposed changes to the constitution.”

The pamphlet can be accessed in full here (PDF in Armenian)