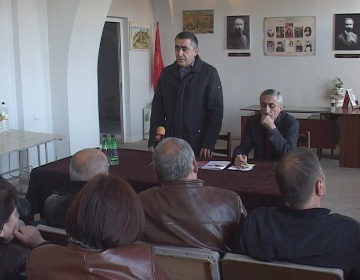 (yerkirmedia.am) ARF-Dashnaktsutyun representatives met with the population of Ashtarak and presented the constitutional changes on November 15. After the speeches, they answered people’s questions. “There were times, when people lived without a constitution. Then they also lived without letters, numbers, thermometer and so on. The Constitution is as important an achievement as any other scientific achievement. It is no accident that the world has developed taking that way,” said Armen Rustamyan.
During a meeting with the residents of Berkanush community in Ararat province ARF-D Bureau member Armen Rustamyan cited the words of Vladimir Nazaryan, a constitutional expert back in 1992. In his work, Nazarian also explained why it is necessary to shift to a parliamentary system of government. “We had three presidents and only their surroundings changed. Those who were left out are complaining now: those who are not acting president are complaining. But they have ruled for 10 years, haven’t they? A system has been establishment in Armenia, due to which those close to the president are protected. This government system has resulted in personality-focused governance,” Armen Rustamyan said.
Another member of the Dashnaktsutyun Bureau, Spartak Seiranyan thinks, even though there is a lack of faith today, we should not sit and do nothing: “without faith even a hencoop cannot be built”, he said. According to the politician, the rejection of the possibilities offered by the new Constitution, means “kindergarten mentality.” “You can write a fine collection of toasts and call it a constitution, but it won’t work if there are no clear mechanisms. In this draft these mechanisms underlie each letter. The new constitution is not a magic wand, but a real opportunity to save the country … We will not see the results the day after the December 6 referendum. We have work to do, but in the result of the work, our country will only advance,” said Spartak Seyranyan.
Member of Parliament Artsvik Minasyan also spoke about the same topic in Ashtarak. As opposition, they welcome the authorities’ will to implement changes, and the process will not end on December 6. He compared the new draft constitution with a new and stronger building design. “Our Constitution is faulty, it has defects. In the result, we haven’t been able to build that building over 25 years, because the design was wrong,” he said.
The constitutional amendments change the rules of the game, even for the elimination of monopolies, ARF-Dashnaktsutyun Yerevan City Committee representative Bagrat Yesayan is sure. “For at least twice we have witnessed companies that tried to act against authorities were punished. There is no other way: if we say “No” to the constitutional amendments, it means today’s reality pleases us. If we are dissatisfied with today’s reality, we must say no to it and “no” means “yes” to the draft constitution,” said ARF-Dashnaktsutyun Yerevan City Committee Bagrat Yesayan. The party representatives stressed during all the meetings, the decisions related to any matter in the country will be taken not by just one person, but in the result of consultation with other political forces. This will become a reality if the public says a decisive “Yes” to the amendments on December 6.