(tert.am) Armenia is facing not only socio-economic problems, but also an atmosphere of mistrust, and a new constitution could remedy the situation, Artsvik Minasyan, an MP of the Armenian Revolutionary Federation Dashnaktsutyun (ARF-D) party, told reporters on Monday.

Under the current Constitution, government agencies are not properly responsible for their functions. 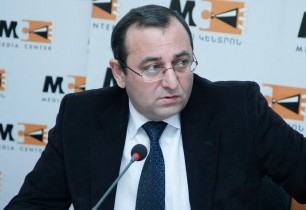 In response to the frequently raised question that Armenia’s current Constitution prevents resolution of numerous problems, Mr Minasyan said that it does not prevent nor does it facilitate because it does not envisage any mechanisms for punishment of those responsible.

“Under the new constitution, Armenia’s government is supposed to submit annual reports, which would enable the Parliament to hold the cabinet responsible,” Mr Minasyan said.

The MP stressed that the constitutional reforms are a real way of resolving the repeatedly raised problems and building up a state of new quality.

“We are sure that parliament government will ensure Armenia’s development.”