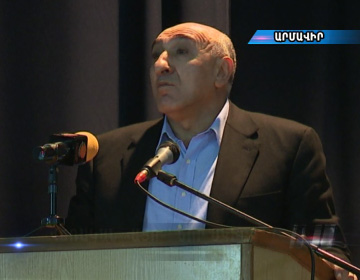 (yerkirmedia.am) ARF-D party members continue meetings in regions within the frames of the constitutional referendum campaign. One of its campaign groups is in Armavir.
ARF-D representative Davit Lokyan gives the names of the countries that have a parliamentary government system and are an example for many countries of the world with their development level. Overall, 2/3 of the world’s countries are governed by a parliamentary system. “This means fearing that parliamentary government may lead our small country to collapse is improbable,” said Lokyan.
The first constitution was adopted 20 years ago in Armenia, where the president was endowed with all the powers of governing the country and there was no counterbalancing mechanism. The reforms of 2005 reduced the circle of those powers, but did not free the country from overcentralization. “What will the parliamentary system of government give us? First of all, it will put an end to the overcentralization and not everything will depend on one person anymore,” said Lokyan.
This government model has always been fundamental for ARF-D. Back in 1991, during presidential elections, the party came up with a major principled issue in front of the people: they were against the presidential system of government and saw the parliamentary governance as the basis for further development of the people.