(armenianweekly.com) ANTELIAS, Lebanon — Catholicos of All Armenians Karekin II and Catholicos of the Great House of Cilicia Aram I will visit the Nagorno-Karabagh Republic (NKR/Artsakh) in the coming days. The announcement was made in a short press statement published by the official website of the Catholicosate of the Holy See of Cilicia. 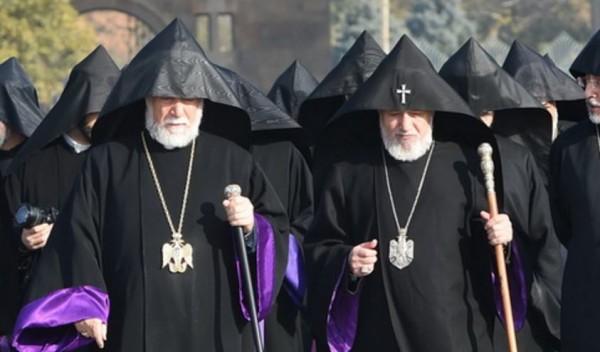 Catholicoi Aram I and Karekin II in Armenia

The Catholicoi will visit the NKR to “give their support to the Armenian Armed Forces and to the people of Artsakh.”

Catholicos Aram I expressed his solidarity with the people of Karabagh during a phone conversation with President Bako Sahakyan on April 6, reported the Catholicosate’s website. According to the report, the Catholicos extended his solidarity to Karabagh, its army, people, and the government. He also said it was the duty of all Armenians to ensure the strengthening of the republic and the protection of its independence.

His Holiness also held a separate phone conversation with Armenian President Serge Sarkisian on April 4, during which he highlighted the importance of national unity and solidarity with the people of Karabagh.