(asbarez.com) YEREVAN—President Serzh Sargsyan was among many government officials who on Monday attended the opening of the ‘Made in Armenia-2016’ exhibition, which will be running in the Meridian Exhibition Center in Yerevan from September 19 to 22. The main goal of the exhibition is to present Armenia’s existing industrial potential, opportunities for development, and assist in entering new markets. 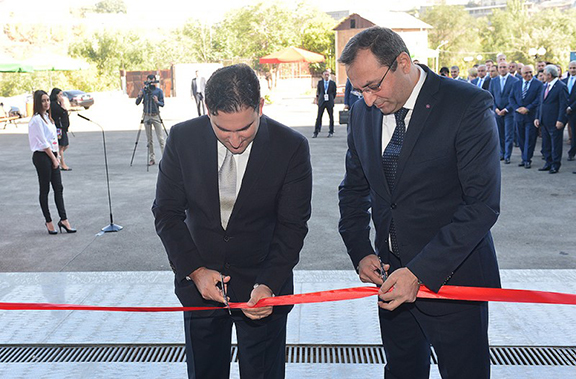 The exhibition opening was also attended by business delegations from the countries that can be prospective importers are the products. Sargsyan toured the exhibition and inquired about the products and services of the companies represented within it.

“The exhibition is a parade of Armenian economy,” the acting Economy Minister Artsvik Minasyan told reporters. According to him, implementation of reforms may give a strong push to the revival of the economy. He added that the most promising areas are IT and innovations, as well as food production.

The executive director of the Armenia Development Fund Karen Mkrtchyan said this year’s exhibition has generated greater interest that in the past, bringing together more than 330 companies.

The exhibition “Made in Armenia-2016″ is one of the biggest events of the past 25 years, representing the production potential of Armenia.

The exhibition was held first in 2015 by the Armenia Development Foundation with the assistance of the government.