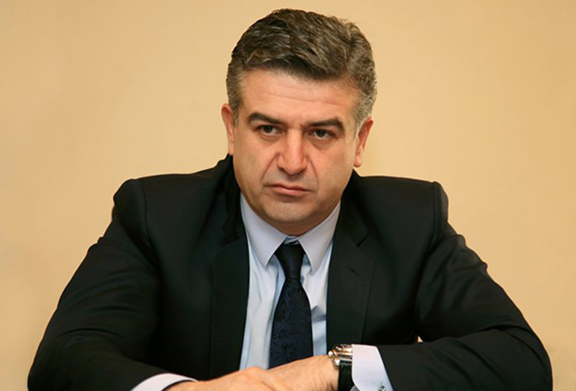 The Republican Party of Armenia parliamentary faction member Artak Zakaryan confirmed Karapetyan’s unanimous nomination, telling reporters after the board meeting that Sarkisian had accepted Abrahamian’s resignation. Zakaryan added that Karapetyan, a member of the Republican Party and former employee of the Russian Gazporm presented his outlook for the government.

“It has been apparent for a long time that without political reforms, economic reforms have not always yielded desirable results. Today, everyone can see the imperative for political reforms,” said Sargsyan, adding the political reforms, first and foremost, dictate a change in approaches to political discourse and to confronting challenges facing the nation.

He explained by saying that the political dialogue in the country must also change whereby discourse with opposition would not stem from a position of power and the government’s doors would be open to all capable individuals who are willing to work to confront issues facing the nation, adding that the “parliament must become the number one stage for the country.”

Sargsyan said changes in the political landscape of Armenia were not imperative because of pressure from external forces, but rather a necessity for the development of the country and the imperative to have a “better and secure homeland.”

“At the same time, I believe, we must not limit ourselves to resources within our ranks and for the resolution of issues before us we must seek and find individuals and people who are able and willing to shoulder responsibilities for the difficult tasks, regardless what part of the world they are,” said Sargsyan.

Newly-appointed prime minister of Armenia, Karen Karapetyan proposed structural changes to the ministries. The new proposal was introduced Thursday September 22 by the government’s chief of staff minister Davit Harutunyan, who, among other changes noted that the ministry of urban development would be dissolved.

The ministry that would be affected the most by this reorganization will the Ministry of Economy, which has been renamed Ministry of Support to Investments and Enterprises. Under the restructuring development of information technology and the department of tourism would be extracted from the ministry’s purview and assigned to other ministries or committees.

The acting Minister of Economy, Artsvik Minasyan, a member of the Armenian Revolutionary Federation-Dashnakstutyn, was one of two ministers that challenged this proposal, which requires parliamentary approval before it goes into effect.

“We want to make it clear to entrepreneurs and investors that there is an agency to which they can present their grievances, demands, desires, objections and advice, and that structure will look after them to ensure that they face no obstacles,” Karapetyan explained during a cabinet meeting in Yerevan reported Azatutyun.am.

Minasyan spoke out against the proposed name change saying that “removing the word ‘economy’ is not desirable to me as the acting economy minister, especially given that I think the economy is not just about investments and support for entrepreneurship.”

This exchange between Minasyan and Karapetyan was the second disagreement between the two. Last week, the newly-appointed prime minister Minasyan’s request to grant a legal tax incentive to a private company. “I don’t believe it,” Karapetyan said on September 15 in response to further explanations given by Minasyan.

The ARF-D was quick to respond when its Bureau member and political representative Armen Rustamyan criticized the prime minister calling his behavior political grandstanding.

Also on Thursday September 22, Karapetyan criticized another ARF-D member of government, the acting Minister of Education Levon Mkrtchyan, saying that he was not satisfied with the explanations given regarding the change of status of a high education institution in Gyumri.

The Armenian Revolutionary Federation-Dashanktsutyun party, of which Minasyan is a senior member, hit back the following day, criticizing the premier’s behavior as a political “show.”

Governing coalition’s junior member ARF-D holds three ministries in the new cabinet. Levon Mkrtchyan and Davit Lokyan will continue heading the Ministry of Education, and the Ministry of Territorial Administration and Development respectively, while former Minister of Economy Artsvik Minasyan was assigned with the Ministry of Nature Protection.