The study visit of a 25-member delegation from the International Union of Socialist Youth (IUSY) kicked off on September 29, 2017 in Yerevan, Armenia and urolled to the Republic of Artsakh until October 1.

At the initiative of ARF-D Youth Office and upon invitation by IUSY, young political activists from 17 countries from Europe, namely Bulgaria, Ukraine, Moldova, Belarus, France, Italy, Belgium, the Netherlands, Austria, Albania, Portugal, Cyprus; from the Near and Middle East: Lebanon, Palestine, Israel as well as from the USA and New Zealand representing their respective socialist and social-democrat parties, gathered in Artsakh and followed the set agenda in its full length, and returned with an objective understanding about the Artsakh (Nagorno Karabakh) conflict, the culture and everyday life of the people of Artsakh, as well as the priorities of the foreign policy of both Republics. 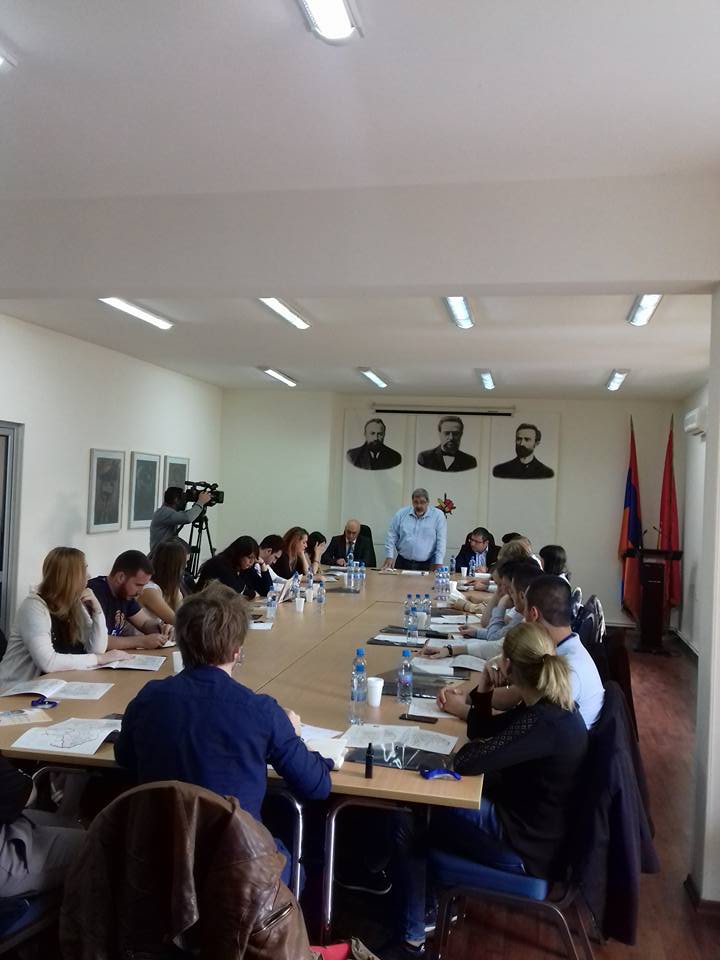 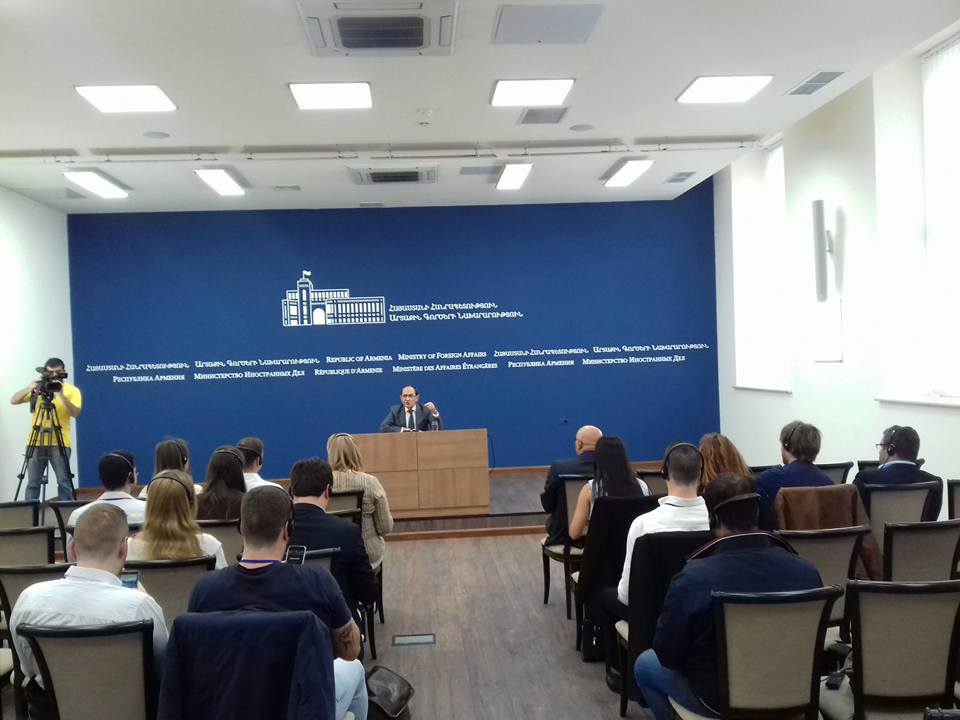 In Yerevan, the delegates had the opportunity to meet with ARF-D Bureau member and head of the party’s Armenian Cause and Political Affairs Office, Giro Manoyan, and the Deputy Foreign Minister of Armenia Shavarsh

Kocharyan. During those meetings the delegates, on one hand got acquainted with the history of the Artsakh conflict and the ARF-D’s position on the settlement process, and on the other, they familiarised with the official stance of the Republic of Armenia pertaining to the negotiation process and the settlement, the present phase of the negotiations and the likely developments. 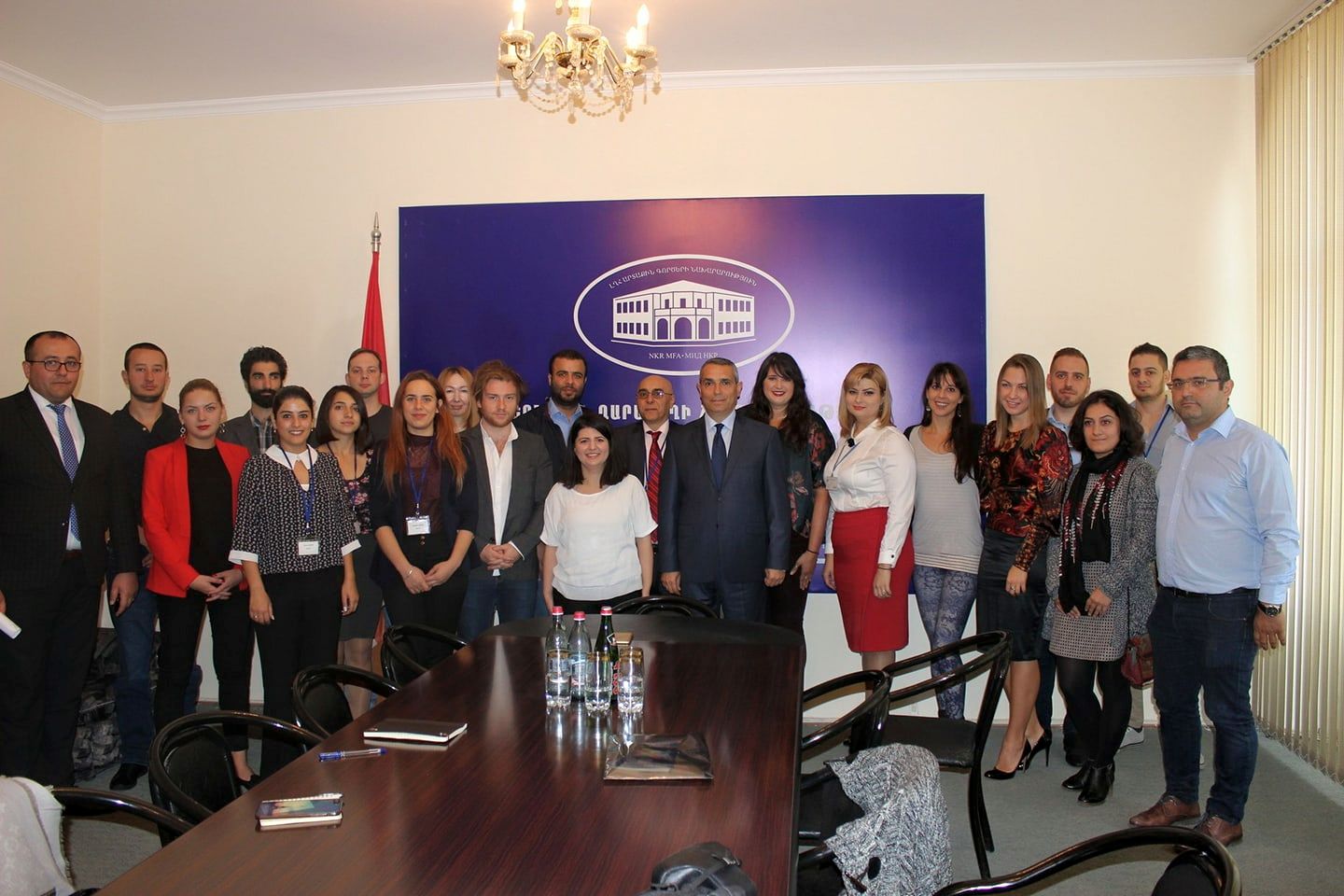 In Stepanakert, Artsakh with the Foreign Affairs minister, Massis Mayilyan

In Artsakh the round of meetings began with the Republic’s Foreign Affairs Minister, Massis Mayilyan. The uniqueness of the meeting lied in the Q&A part which featured questions about the settlement of the conflict in particular the position of the Republic of Artsakh, the case of its recognition by the international community, the international relations of Artsakh and the political priorities of the Foreign Affairs ministy. 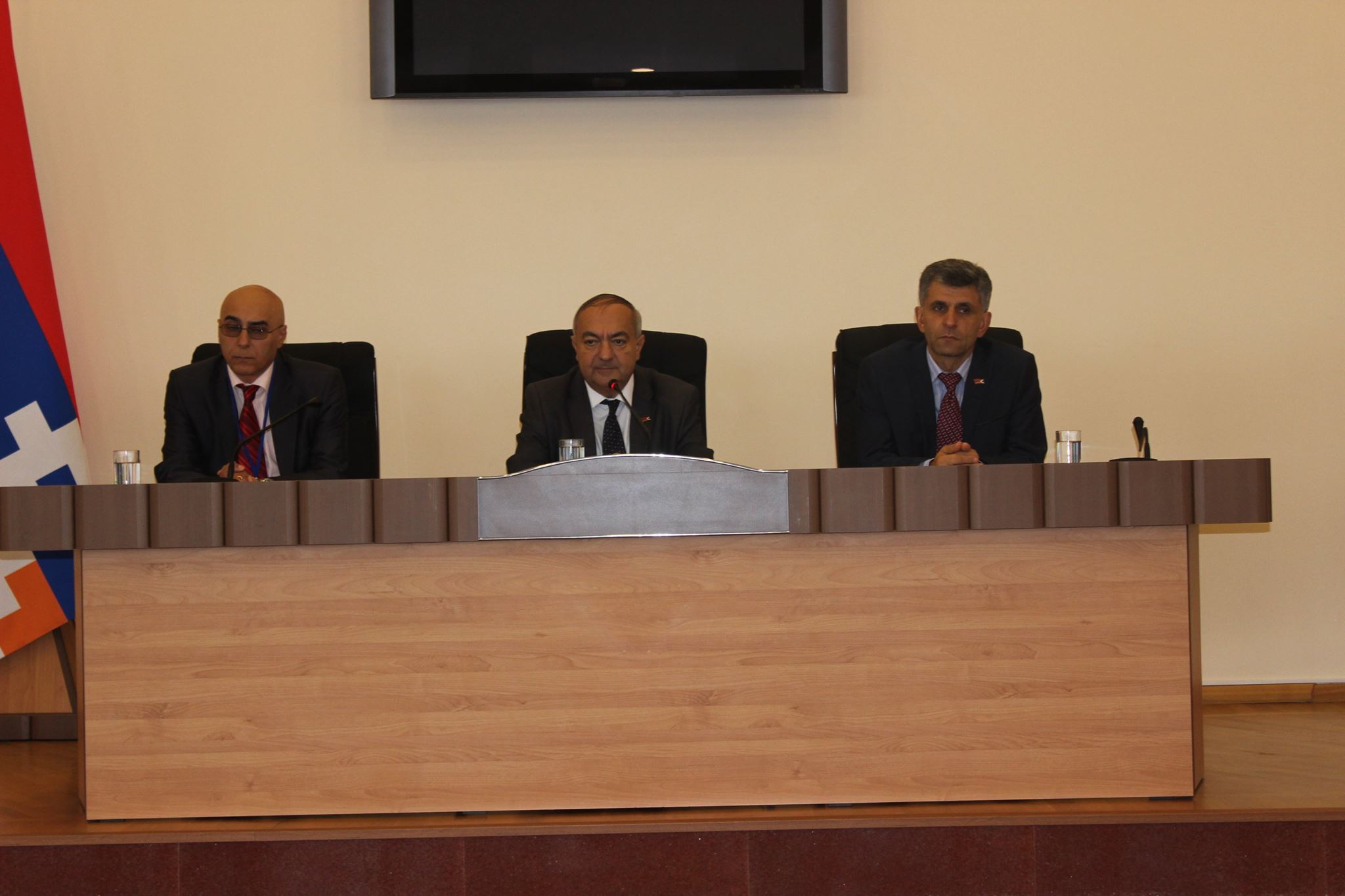 The next important meeting on the agenda took place in the National Assembly where the delegation was greeted by the ARF-D parliamentary faction. ARF-D MPs Armen Sargsyan and Davit Ishkhanyan, who also heads the ARF-D Artsakh Central Committee, presented in a thorough manner the ARF-D’s position as to the settlement of the conflict. Sargsyan and Ishkhanyan also highlighted the Socialist International’s balanced approach to the settlement of the conflict, on the international political and inter-party arena. 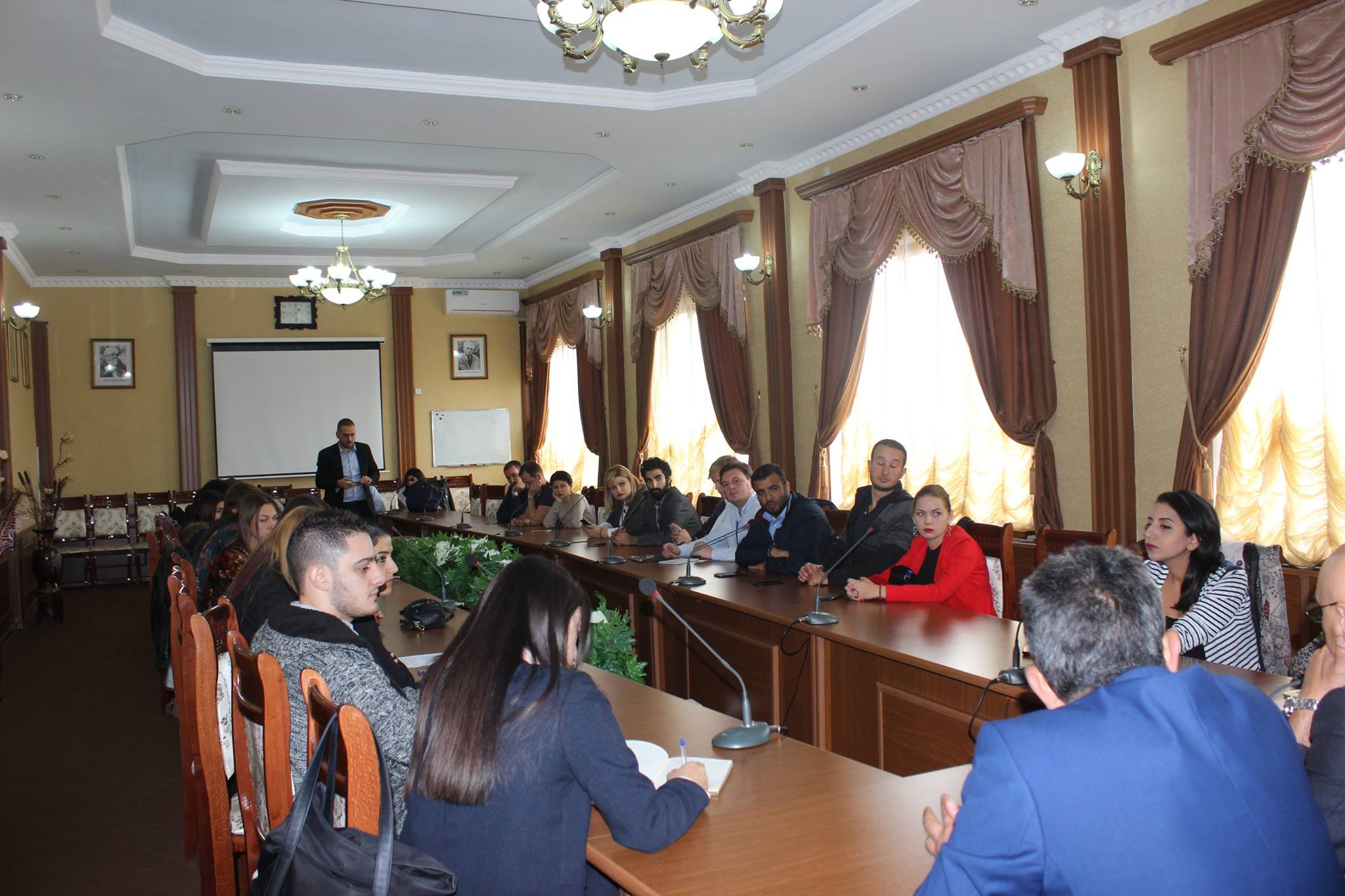 In acknowledgment of the important role of civil society in the process of state-building, the ARF-D Youth Office had scheduled a meeting with representatives from four NGOs. The discussion of the meeting that was convened at the State University of Artsakh developed around the main sectors of action of civil society: issues of concern to the youth, education, culture, healthcare, matters of refugees, etc.

The delegation members visited The Halo Trust, an English humanitarian organisation, established in Artsakh in 2000, conducting mine clearance. As a result of the Halo Trust’s work hundreds of hectares have been demined thus, saving hundreds of lives from impending danger. 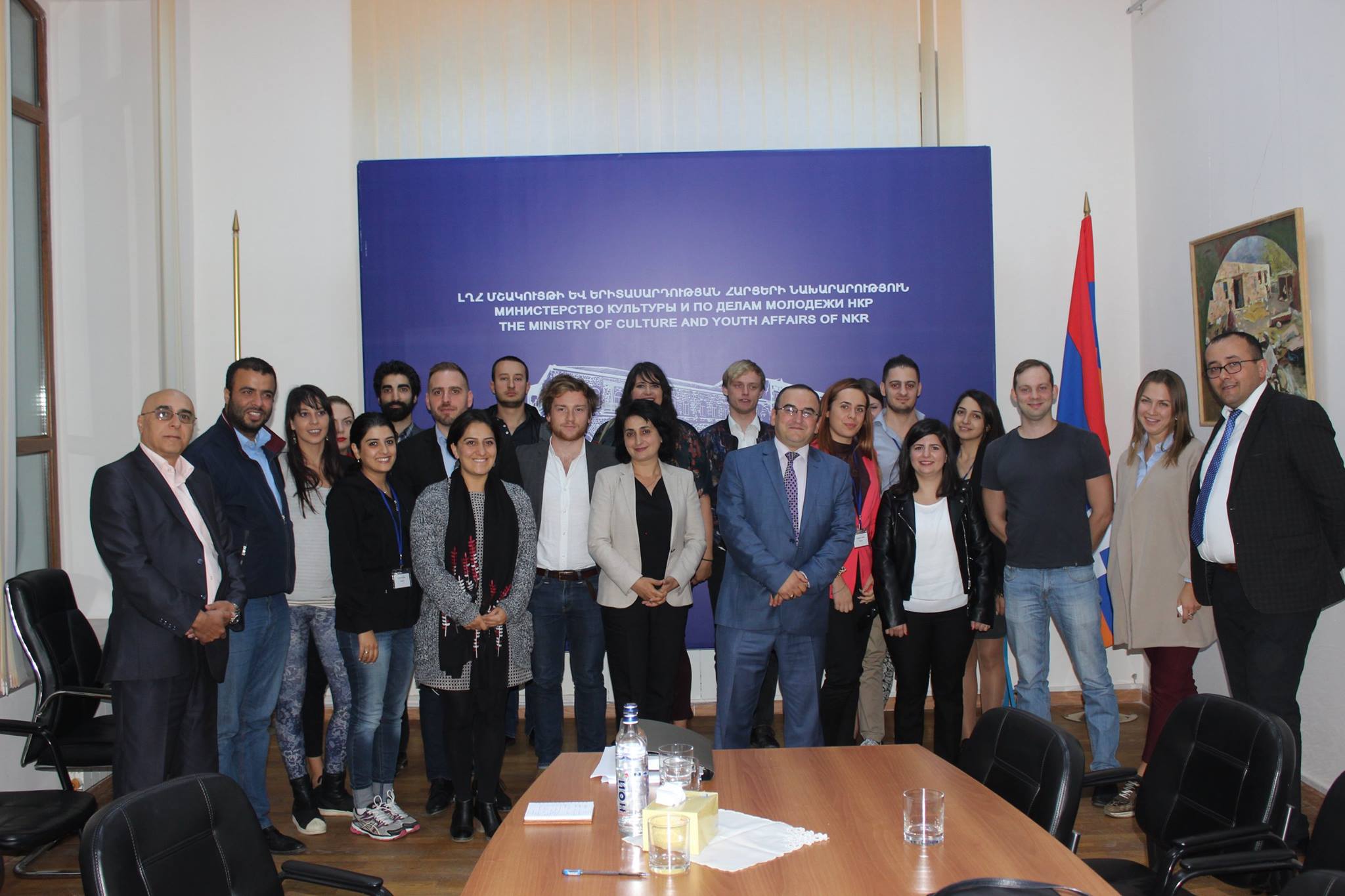 With the deputy minister of Culture and Youth Affairs, Gayane Gevorgyan

In Shushi, the IUSY delegates met with the deputy minister of Culture and Youth of the Republic of Artsakh, Gayane Gevorgyan and got familiar with the cultural policy of the Republic, youth employment and issues that concern their counterparts in Artsakh. The delegation visited the still standing Iranian mosque in Shushi.

The last day the delegation was shown the intellectual potential of Artsakh with a visit to the TUMO Center for Creative Technologies in Stepanakert where they had the chance to learn about its work and meet with Artsakh’s innovative youth. 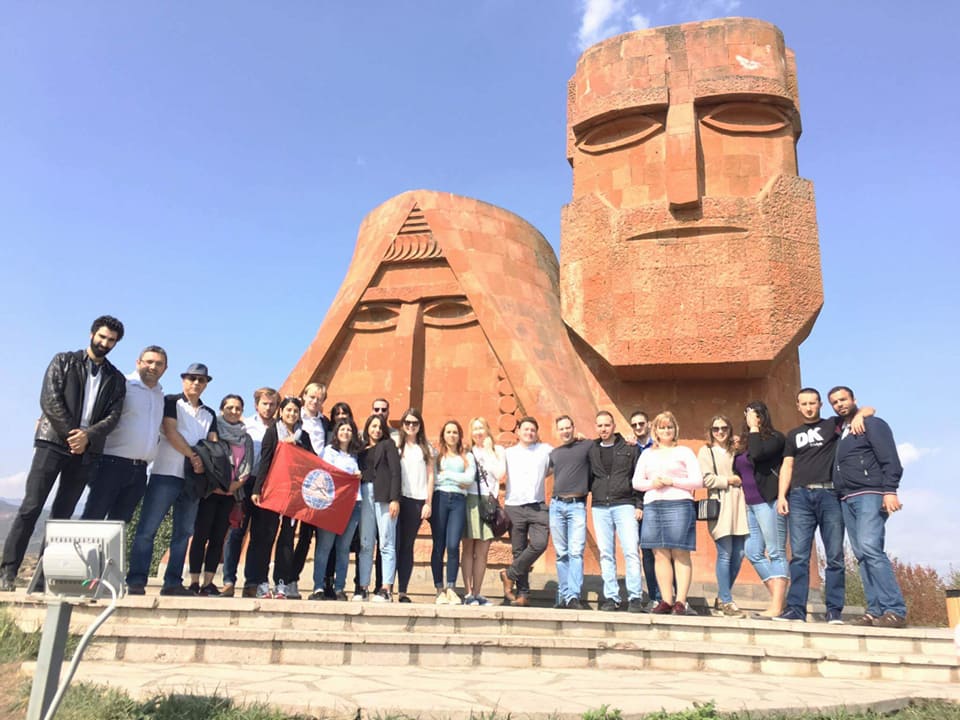 Members of the delegation at the “We Are Our Mountains” (Tatik Papik) memorial complex in Stepanakert (Photo: IUSY/Facebook)

The indisputability of Artsakh being an Armenian territory was once more demonstrated through visits to Artsakh’s cultural heritage sites including the monastery complexes of St. Ghazantchetsots in Shushi and Dadivank in Karvadjar, and the “Tatik Papik” memorial complex.

The participants departed with positive impressions about Artsakh as well as with expectations to return.

The Armenian Youth Federation, under the coordination of the ARF-D Youth Office will continue with its active policy of international relations which aims at crystalising for the future political actors in Europe and the world in general, the objective and grounded understanding around the conflict in Artsakh, the Armenian Cause and issues that concern Armenians.

(armenianweekly.com) YEREVAN—At the initiative of the International Union of Socialist Youth (IUSY) and with the participation Armenian Revolutionary Federation-Dashnaktsutyun’s (ARF-D) Bureau Youth Office, about two dozen delegates representing member organizations arrived in Armenia Friday as a part of a three-day visit that included a trip to Artsakh.

Prior to departing to Artsakh, the delegates had the opportunity to meet with Deputy Foreign Minister of Armenia Shavarsh Kocharyan and ARF-D Bureau member and head of the party’s political affairs Giro Manoyan.

In addition, a joint press conference was held that featured Gevork Ghukasyan, a representative of the ARF-D Nigol Aghbalian Student Association; Sarine Abrahamian, a representative of the ARF-D Youth Organization, the Armenian Youth Federation; Rosella Pera, an executive board member of the Italian Socialist Party; and Dimitar Mitev, the chairman of the Bulgarian Social Democratic Party. 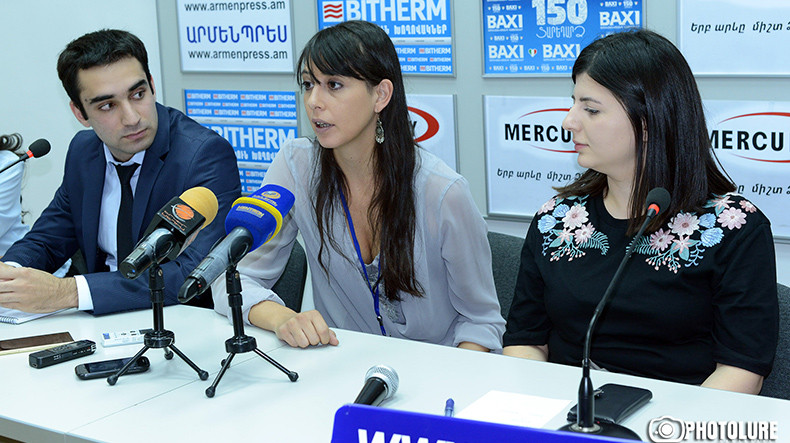 “The International Union of Socialist Youth is the biggest political youth organization in the world, representing socialist and social-democratic youth organizations,” said Gevork Ghukasyan at the press conference. “Today’s Yerevan visit has brought together delegations from Europe, the U.S., the Middle East, and New Zealand. This provides an opportunity to make the future leaders aware of the Karabagh conflict and to create a more favorable political arena to discuss the issue,” stressed Ghukasyan.

In Artsakh, the European delegates will hold meetings with numerous political figures, including the Human Rights Defender, as well as representatives of the Tumo Center for Creative Technologies, the Artsakh Foreign Ministry, and various Artsakh youth organizations. The agenda also features visits to historical monuments.

Chairperson of the Bulgarian Social Democratic Party Dimitar Mitev stated that this is his second visit to Armenia. While discussing the Artsakh conflict, he noted that after becoming aware of all the facts, he realized that Artsakh is a free and independent state that has been populated by Armenians throughout the region’s history.

“Kosovo has been an independent state for already 17 years, whereas Karabagh, having a richer historical background, unfortunately remains unrecognized,” said Mitev during the press conference. “The country will be eventually recognized amid the pressure of the international community.”

Both Pera and Mitav were aware of the possibility of appearing in Azerbaijan’s blacklist when visiting Artsakh.

“We see who the aggressors are and who are the victims of that aggression. We support our Armenian friends. It is not important for us to be blacklisted by an aggressive state like Azerbaijan. A more important thing is that the people of Artsakh continue to live a safe life,” Mitav said.

The Italian delegate Pera also assured the possibility of ending up in Azerbaijan’s blacklist does not frighten them.

Newly appointed Artsakh Foreign Affairs Minister Masis Mayilian received the IUSY representatives in Stepanakert on Sept. 30. He welcomed the visit of the delegation to Artsakh, noting that it is the best way to study the realities on the ground and to get truthful and objective information on the political processes taking place in the country.

During the meeting, Mayilian briefed the guests on the foreign policy priorities of Artsakh, as well as on the steps aimed at achieving progress in the conflict settlement process and international recognition of Artsakh. The foreign minister also answered participants’ questions related to the foreign policy challenges and regional problems.

A total of 25 delegates, including representatives of socialist parties and NGOs from 17 countries, are a part of the visit to Armenia and Artsakh.