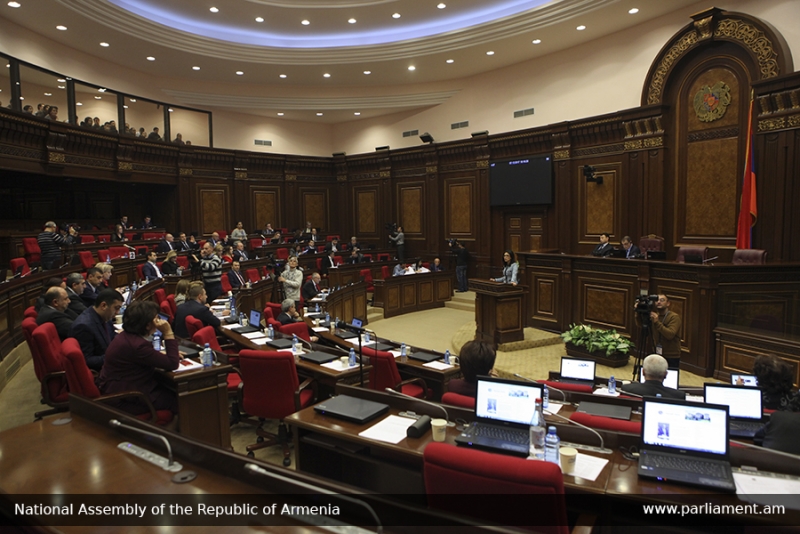 The law was passed with 73 votes for and 12 against, with 6 abstentions, after debate and some resistance from a few parliamentarians.

Prime Minister Karen Karapetyan’s government pushed the bill through despite opposition from some of his fellow Republican Party of Armenia (RPA) members. The 12 parliamentarians who voted against the bill, however, were all members of the Tsarukian bloc—a self-described opposition party.

Critics of the bill argued that government interference in family affairs would run counter to Armenian traditional values and undermine the fabric of Armenian society.

The Armenian Revolutionary Federation-Dashnaktstutyun (ARF-D) parliamentary bloc in Armenia, a coalition partner in Armenia’s RPA-led government, first voiced support for the adoption of the bill in October. ARF-D went on record to say it viewed the proposed bill as an essential part of a societal value system, and necessary for a healthier society.

“The heated discussions and the many opposing views—even regarding our society’s value system—are evidence that problems exist within our society. Any manifestation of violence is reprehensible, especially if it is taking place in the family,” ARF-D Supreme Council representative Aghvan Vardanyan noted at the time during an interview with Yerevan-based Yerkir Media.

Some Armenian organizations, such as the pan-Armenian Armenian Relief Society (ARS), also voiced support for the proposed bill. “As a country that takes pride in having given women the right to vote during the Independent Republic of 1918—and also having appointed a woman to a diplomatic post at a time when women in most of the developed world did not have the right to vote—this bill comes at an important stage for gender equality in today’s Armenia,” read a part of a statement released by the ARS on Oct. 24.

A petition calling for the Armenian government to pass a law criminalizing domestic violence emerged in late October on the website Change.org. The petition, addressed to Prime Minister Karen Karapetyan, was the result of a grassroots effort by some in the Armenian Diaspora to have a say in the debate taking place in Armenia.

The author of the petition, Annette Moskofian, an active member of the ARF-D, called for people to sign the petition to help pioneer what she called “a more just Armenia.”

“[We] had strong, progressive legislation and respected equality of genders [during the first Armenian Republic of 1918]. Our present Republic needs to be even more progressive and democratic than the previous one,” she told the Armenian Weekly’s Karine Vann in an interview.

The petition received nearly 3,000 signatures from supporters around the world.

Separately, a statement released by a group of Diaspora Armenian artists, scholars, and writers a little over a week after the petition was released called on the Armenian authorities to adopt the law. The more than 50 signatories included artist and activist Serj Tankian; actor and playwright Eric Bogosian; novelists Chris Bohjalian, Micheline Aharonian Marcom, and Nancy Kricorian; artist and author Vahe Berberian; photographer Scout Tufankjian; and journalist David Barsamian.

Several groups, including the Yerevan-based Coalition to Stop Violence against Women, criticized the changes to the name and certain parts of the bill. “From the new title of the law, it is obvious that the draft law underwent conceptual changes, shifting from the protection of an individual into ‘family harmony,’ which not only lacks a legal definition but also contradicts local and international legal norms,” read a statement released by the coalition last month. The group also expressed concern that one of the basic principles under the bill’s second article enshrined the protection and maintenance of the “traditional Armenian family.”

“To tell you frankly, it’s a matter of semantics,” Yerevan’s Women’s Support Center Executive Director Maro Matosian told the Armenian Weekly. “For us practitioners, we understand that this is something to appease the opponents to the law. I don’t think the title itself will create much damage. I think that the content of the law is what we should be focusing on,” Matosian said.

The law is not perfect, Matosian said: “It never is the first time.”

“In Georgia, for example, amendments were made two years after the passage to improve it. So we’re hoping for the same thing in Armenia,” Matosian explained, describing the passage of the law as a good step forward for Armenia: “It was very much necessary for Armenia to be in line with international commitments and the conventions that have demanded domestic violence laws.”

Matosian said the new law unfortunately does not criminalize domestic violence right away—that it refers instead to the penal code, which is currently in draft form. “The law also insists on reconciliation, which could be considered a negative point. In cases of domestic violence, this is not accepted practice—because there is an imbalance of power and the victim is dominated,” Matosian said.

The reconciliation clause could be damaging, since, according to Matosian, a police officer or social worker can ask a victim to return to the home and try to reconcile with an abusive husband.

According to the law, however, Armenian law-enforcement authorities will be required to stop violence within families that threatens the lives or health of their members. Police could also force a violent spouse to leave the victim’s home and stay away for as long as 20 days. Courts will be able to extend those bans for 18 months.

The law also specifies that the definition of domestic violence is not limited to physical violence but also sexual, psychological, and economic violence.

Matosian said the passage of the law is significant because it has certain provisions did not previously exist in the country: “These provisions include the training of service providers; confidentiality of the victims; protecting orders; removing the abuser from the homes for a certain period; police accompanying victims to the home to retrieve belongings; and so forth.”

“These were always needed but never in place before,” she said. “In addition, there will be an effort to open new shelters and assist existing shelters.”

For Matosian, the passage of the law sends a strong message to sectors of Armenian society that continue to deny that domestic violence exists in Armenia. “This is proof that it does actually exist and that something should be done about it,” Matosian said.

Many have argued that implementation will be difficult. Matosian said securing proper practices will, in fact, be an uphill battle. “Civil society must be very diligent in this regard, because we are really the only ones monitoring and practicing the support and assistance based on international standards. It’s not going to happen overnight,” she admitted.

Matosian also explained that it is imperative for the law to be accompanied by mechanisms. “The police, for example, will have its own mechanisms put in place regarding implementation—what to do, what not to do. The same goes for legislators, social workers, and so forth,” she noted, “We’re waiting to hear about these mechanisms to be put into place.”

Matosian’s Women’s Support Center will be “keeping an eye out” to see how the law is implemented. “We will try to identify some of the gaps, some of the necessary measures not being taken, and based on that we will make our recommendations and amendments,” she said.

The Women’s Support Center will likely be able to make these recommendations in about a year or a year and a half, after properly identifying the problems, she said: “We can monitor, we can observe, we can draw conclusions based on the evidence.”

A 2011 survey on domestic violence in Armenia, conducted by Proactive Society with support from the Organization for Security and Co-operation in Europe (OSCE), found that almost 60% of survey respondents said they had been subjected to some sort of domestic violence in their lifetime.