WASHINGTON—Artsakh (Nagorno Karabakh) President Bako Sahakian was joined by his Foreign Minister Masis Mayilian, Parliamentarians David Ishkhanian and David Melkoumyan, and his Deputy Chief of Staff David Babayan at a policy briefing by national and regional leaders of the Armenian National Committee of America on the full array of pro-Artsakh priorities at the national, state, and locals levels of the U.S. government. 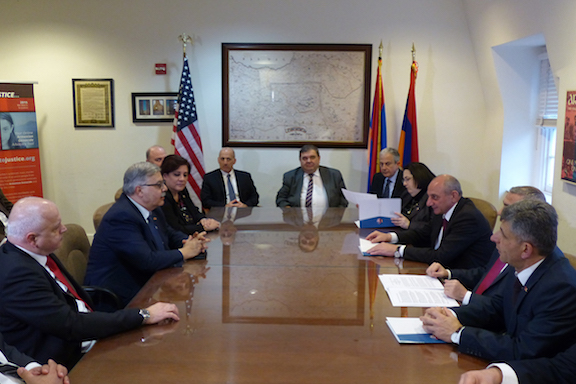 Prior to the policy briefing, President Sahakian visited the Aramian House, the downtown Washington, DC home of the ANCA’s signature youth and career development initiatives: The ANCA Hovig Apo Saghdejian Capital Gateway Program and the ANCA Leo Sarkisian Summer Internship Program. The visiting head of state was welcomed by Gateway Program Director Tereza Yerimyan, who shared the programs, features, and successes during a presentation and tour of the 8-bedroom property in the prestigious Dupont Circle neighborhood. 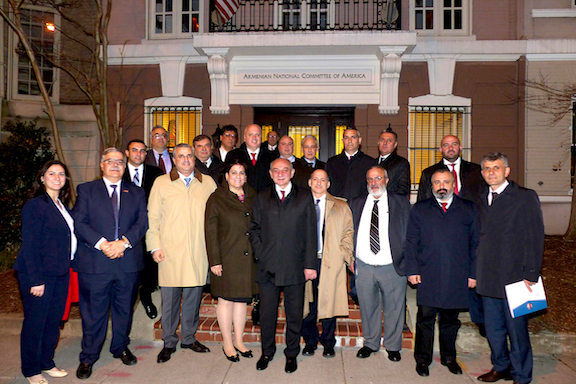 Artsakh President Bako Sahakian and his delegation at the ANCA headquarters

“We were pleased to welcome President Sahakian to the Aramian House, a powerful brick-and-mortar symbol the ANCA’s long-term investment in our youth and enduring commitment to strengthening America’s friendship with the people of Artsakh and Armenia for generations to come,” said Gateway Program Director Tereza Yerimyan. “It was an honor to host this first of many visits by an Artsakh head of State, whose warm words of support for our ANCA leadership development programs hold special meaning for us all.” 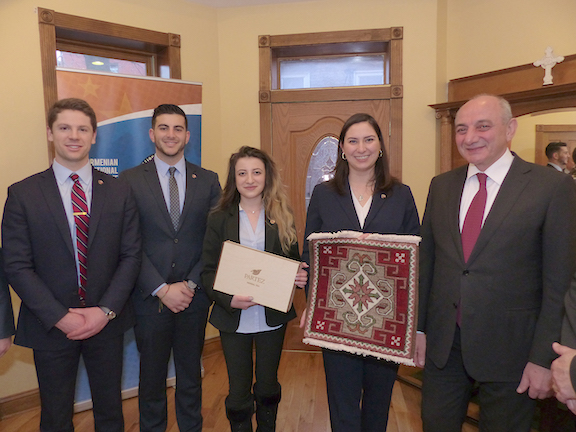 Among those taking part in the briefing were ANCA Board Member Greg Bedian of Illinois, ANCA-Western U.S. Chair Nora Hovsepian, ANCA Eastern U.S. board member Armen Sahakian and the ANCA Executive Director Aram Hamparian and his Washington DC team. Accompanying the Artsakh delegation was the republic’s Representative in the United States, Robert Avetisyan and Armenian Ambassador to the U.S. Grigor Hovhannessian. 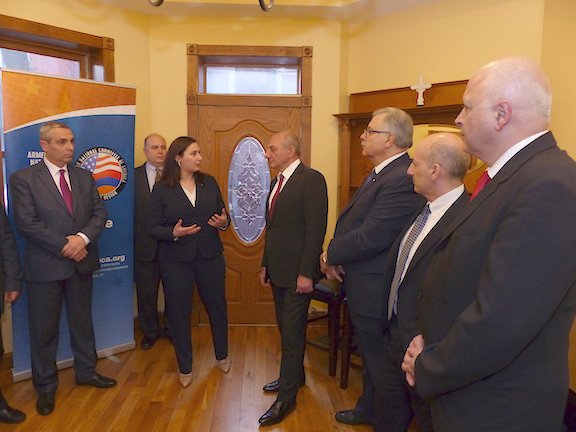 ANCA Communications Director Elizabeth Chouldjian, who led the national-level advocacy section of the briefing, noted afterward, “We welcome high-level policy briefings as truly unique opportunities to share our work, to exchange ideas, and explore pathways forward toward a durable and democratic resolution of outstanding issues between Artsakh and Azerbaijan. Our Artsakh advocacy program – which covers a broad array of policy priorities – aligns with our core aims of independent status and inviolable security for Artsakh’s citizens and state.”

Among the key issues included in the briefing were: