WASHINGTON—Armenian-American community leaders from across the U.S. gathered in Washington to congratulate Republic of Artsakh (Nagorno Karabakh) President Bako Sahakian on his successful visit to the nation’s capital this week, celebrating the growth of Artsakh’s ties to America, its enduring commitment to peace, and its thriving democracy, reported the Armenian National Committee of America. 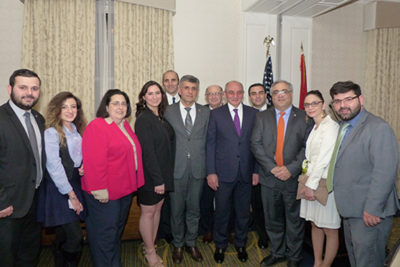 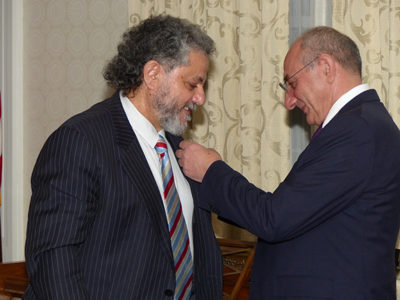 Dr. Sarkis Agasarkisian, a leading advocate of ANC of Georgia, received the Artsakh Medal of Gratitude for his work in securing state recognition of Artsakh independence in 2016 (Photo: ANCA) 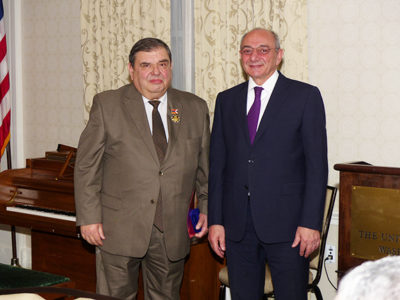 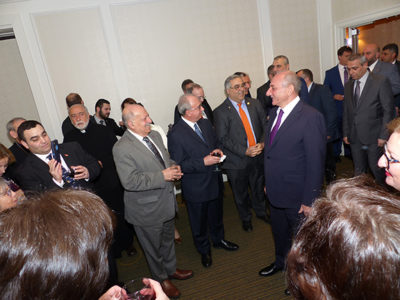 Republic of Artsakh President Bako Sahakyan and his delegation greeted by Armenian American community leaders at the Washington D.C. reception in his honor (Photo: ANCA)

“In honoring President Sahakian today, we honor his generation – some of whom are still with us and some of whom are not,” said ANCA Executive Director Aram Hamparian. “A generation, starting in the late 80’s, that turned the tide of a thousand years. The tectonic plates of the Armenian nation pivoted on the shoulders of people like President Sahakian. We went from losing land, from losing hope to a rebirth. The debt that we owe cannot be repaid and in some ways, its true scope cannot yet be fully understood.”

Hamparian went on to note that, “It’s what we do after we leave tonight that matters the most. We honor the President and those that serve under him by what we do — with our words, but ultimately with our hearts and hands. If they are the first army of the Armenian nation, we must be the second.”

“The Armenian community of America is one of the strongest and well-established segments of our Diaspora. You carry out great work to develop and deepen Artsakh-US and Armenian-American relations, cooperation, and friendship,” said President Sahakian.

Expressing thanks to the United States for serving as safe-haven – a second homeland – to survivors of the Armenian Genocide, President Sahakian noted the similarities between the Republic of Artsakh and the U.S. “The principles of freedom, democracy, initiative, are typical to our peoples. A no less significant factor for enhancing our cooperation is the geopolitical reality and its imperatives. Artsakh is open to such cooperation and we see the same willingness in our American friends, some of whom are here today.”

“We have chosen freedom and independence,” continued President Sahakian. “We are building a democratic country and are able to defend it – and we will spare no efforts in this direction, with the support of Mother Armenia and Armenians worldwide, and our friends in different countries, including the support of people here today.”

During the evening, the ANCA’s national, regional and local teams were honored with the Artsakh Gratitude Medal. They were joined by Dr. Sarkis Agasarkisian, a lead advocate of the ANC of Georgia, who spearheaded Georgia’s recognition of Artsakh in 2016; and, the Armenian Assembly of America. European Armenian Federation for Justice and Democracy (EAFJD) Chairman Kaspar Karampetian received the prestigious Mesrob Mashdots Medal for his years of service in advancing European – Artsakh relations.

The Medal of Gratitude is awarded to individuals, organizations, and collectives for significant contribution in restoring and developing the economy, science, culture, social spheres of the NKR as well as for defending and promoting international recognition of the Republic.