SYDNEY & MELBOURNE: The second-ever #ARTSAKHSTRONG Telethon, which encouraged Armenian-Australians to donate to the “Republic of Artsakh Independence, Security and Peace Foundation”, raised a massive $75,000.

On Monday, 19th March 2018, Armenia Media Inc.’s dual products, “Armenia TV” and “Armenia Radio” broadcast via Facebook Live and Sydney’s 99.3FM from 7pm to 10:30pm (local time). Nora Sevagian was the TV anchor and Azniv Ingilizian was the Radio anchor, both ably assisted by technical assistants and joined during the broadcasts by community leaders for interviews. 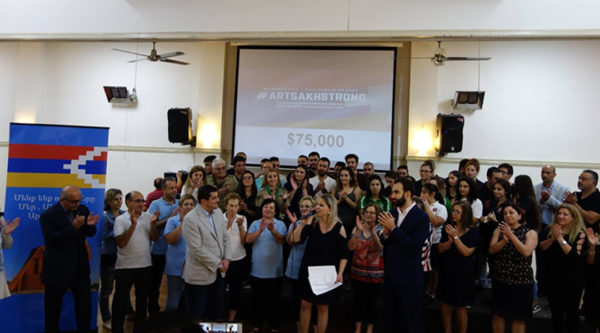 The visiting State Minister of the Republic of Artsakh, the Hon. Arayik Harutyunyan headlined the interviews, which also featured Primate of the Armenian Apostolic Church of Australia and New Zealand, Bishop Haigazoun Najarian, Kevork Vartanian – Chair of the Armenian Revolutionary Federation (ARF-AU) Central Committee, Kaylar Michaelian – Republic of Artsakh’s Representative to Australia, Hanriet Andriasian – Adviser to the Diaspora Minister of the Republic of Armenia, Galstaun College Principal Edward Demirdjian, and the Executive Director of the Armenian National Committee of Australia (ANC-AU), Haig Kayserian.

Minister Harutyunyan praised what he was witnessing as something that should become an example for other communities.

“We are building a nation in Artsakh and refuse to rest on our laurels in our battle for recognition, and have chosen the path of democracy to achieve the peace our people crave and deserve,” he said. “I praise this community, the Armenian-Australian community is organised, it is clear in its directives and ready to sacrifice for the people of the Republic of Artsakh.”

Former journalist at Artsakh news network, Abaraj, Armine Narinyan was also in attendance and was interviewed by Sevagian.

“It was always a surprise for us in Artsakh when we heard that a community in faraway Australia was in support of us, and now I am very happy and motivated to be seeing it with my own eyes,” Narinyan said.

Kevork Vartanian of the organising ARF-AU commented: “We want to congratulate all the organisers, volunteers and participants in this Telethon, and the presence of all of you online and in our Agoomp is evidence that our community is clear in its priorities and ready to accept a part in the defence of Artsakh.”

Hundreds of Armenian-Australians, particularly youth from the AYF-AU, Homenetmen, Hamazkaine dance groups and Hamazkaine school students from Galstaun College and the three Saturday schools, filled the Armenian Cultural Centre (Agoomp) in Willoughby for the Facebook Live Telethon telecast. The Armenian Relief Society of Australia also provided a large number of volunteers. All the organisations who donated presented big cheques and expressed their feelings in what was an unprecedented outpouring of support from Armenian-Australians for Artsakh.

Live donations received from the Armenian Resource Centre of Australia, its MANOH Committee which aids refugee Armenians from the Middle East, as well as the Karen Jeppe College Alumni – Australian Chapter were very well received.

The mood was always upbeat during the telecast, with star community singers Raffy Adourian and Sako Mekhmeljian entertaining the gathered, and Agoomp caterers, Levon and Tamar Sajonian ensuring no volunteer left with an empty stomach.

In Melbourne, the Armenian Community Centre in Springvale was also buzzing, with outcalls from members of the leaders of the local Armenian organisations leading to donations totalling nearly $7,000.

ANC-AU Executive Director, Haig Kayserian explained the importance of this support from the community.

“The Armenian National Committee of Australia, as the representative of Armenian-Australian issues on the greater Australian political stage, including our concerns for Artsakh and its people’s right to self-determination, is greatly encouraged by this important show of support from our community,” Kayserian said.

“The hundreds from our community who donated have delivered another clear message to our Australian legislators, that Australian citizens of Armenian heritage recognise the Republic of Artsakh and we expect our political leaders to respond to this will of their constituents, and do the same.”

Armenia Media, Inc. – the broadcaster of the #ARTSAKHSTRONG Telethon – announced that the Facebook Live videos attracted a total of 22,783 views during the broadcast, with each video averaging over 2,200 views. These numbers will increase significantly with people watching on delay in coming days.