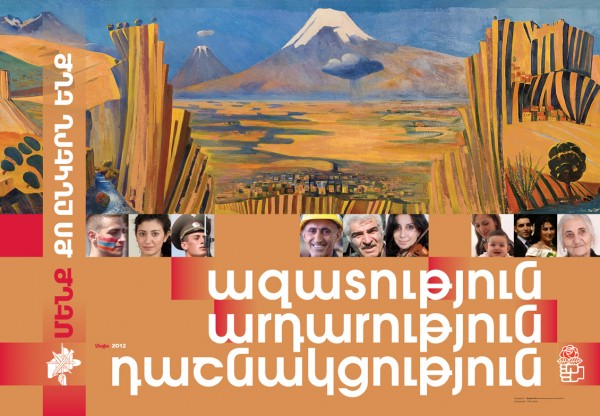 On March 21, under the banner of “Liberty. Justice. Dashnaktsutyun (Federation)” the Armenian Revolutionary Federation-Dashnaktsutyun, unveiled its lists of candidates for the upcoming parliamentary elections slated for May 6. The proportional list comprised of 85 candidates is headed by Bureau member and Head of the ARF-D Parliamentary Faction, Vahan Hovhannesyan. Moreover, eight candidates will run in different single-seat constituencies.

Hovhannesyan was joined by fellow parliament members Armen Rustamyan and Artashes Shahbazyan at a press conference, where they unveiled the lists and discussed some of the reasoning behind the candidates.

They also unveiled the elections poster, the elections motto (“We are your comrade: Liberty, Justice, Dashnaktsutyun”) and the 2012 Pre-election Manifesto.

Explaining that compiling the list was an arduous process, Hovhannesyan asserted that “Our list is the most successful one and individuals named on our list are worthy of becoming parliament members.”

“I believe that voters have realized that the lies and promises [by the ruling elite] must not be trusted. The campaign will be heated and we have serious expectations,” said Hovhannesyan about the outcome of the elections. 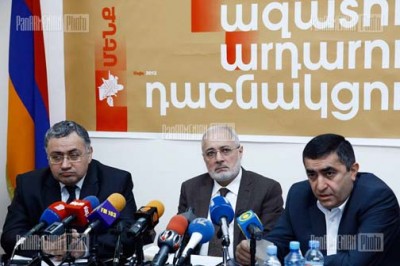 Hovhannesyan explained that the ARF-D has kept its promise of shuffling the list and bringing new actors to the legislative arena. As a result, half of the current ARF-D parliamentary bloc is not part of the current list of nominees. Those that have not been incorporated within the list have other responsibilities in the political arena.

Rustamyan told the press conference that there was clear logic behind the list, which seeks to fulfill certain political goals.

“ARF-D aims to change the entire regime and make systematic changes in our country” said Rustamyan.

Under the current electoral code, 90 of the 131 members of parliament are elected on the proportional system, while the remaining 41 members elected on the single-mandate.

Late last year, the ARF-D along with the other parliamentary opposition bloc, the Heritage Party, sought to reform Armenia’s electoral system by proposing a 100-percent proportional system, which they said would minimize voter harassment and vote rigging.

The measure was turned down last month by the ruling coalition governing the parliament.

The ARF-D currently holds 16 seats in the 131-member Parliament. The number of seats is determined by the percentage of the votes garnered by the party after the election. The members of parliament are seated in ascending order of the list submitted to Central Electoral Commission.

Below are the ARF-D candidates: