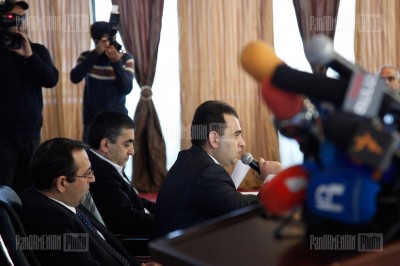 In December 6, ARF-D hosted a conference titled “Under a united agenda for the presidential election” at Erebuni Plaza hotel in Yerevan and presented its seven-point platform to the audience.
Parliamentary and off-parliamentary political forces and numerous civil society representatives attended the conference among them Tigran Ourikhanyan and Vahe Enfiadjyan from the Prosperous Armenia Party, Raffi Hovhannisyan, Ruben Hakobyan and Armen Martirosyan from Heritage party, National Self-determination Union President Paruyr Hayrikyan, Armenian National Congress member and Armenian National Movement body’s president Aram Manukyan.
At his opening remarks, ARF-D Armenia Supreme Council’s Vice President, Arsen Hambartsumyan underlined that the party’s seven-point platform can serve as a platform for the forming of united front. He also said that ARF-D will take its final decisions after the end of the consultations rounds.
“Arrangements made behind the curtain won’t deliver results. We are standing in front of the challenge of going to elections with a concrete roadmap” Hambartsumyan stated.
ARF-D Armenia Supreme Council President, Armen Rustamyan said that the slogan of the conference complies totally with the current situation the country is in, as well as with the society’s demands. Citizens’ faith into the election process has reached the minimum point. Our initiative of uniting society aims exactly at changing this inauspicious ambiance and turning elections into a useful process. Rustamyan said that the prospective of such a development is realistic but no party has society’s necessary trust in order to mark an accomplishment of this sort. Only if oppositional parties joined forces and united around a general purpose and a general action plan a change of the regime through elections could be realized. According to Rustamyan, the seven-point platform is a composition of the necessary and adequate steps the country should take in order to pull out from this deep and versatile crisis by simultaneously providing security and rapid development. ARF-D is convinced that first the parties should agree upon the agenda and the roadmap to its realization and then start consultations around a joint oppositional candidate and only then one could expect to seriously succeed in the upcoming presidential election.
ARF-D MP, Artsvik Minasyan, in his speech highlighted that the objective of the party is to advance quality. ARF-D believes that the seven-point platform could be the basis for the society to come together and unite.