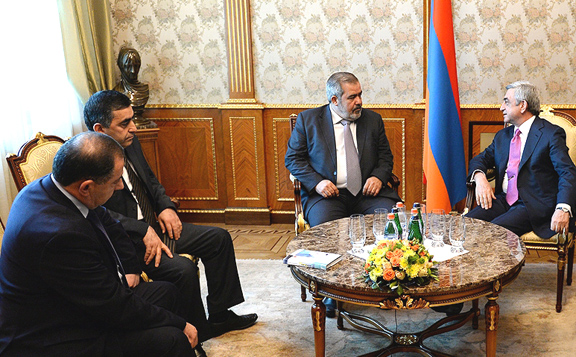 (asbarez.com) YEREVAN — A delegation of Armenian Revolutionary Federation-Dashnaktsutyun (ARF-D) leaders on Thursday met with President Serzh Sargsyan, as part of series of consultations the president held with the parties represented in the National Assembly.

Heading the ARF-D delegation was its Bureau chairman Hrant Margaryan and leaders of the party’s parliamentary bloc Armen Rustamyan and Aghvan Vardanyan.

Sargsyan also held similar meetings Thursday with representatives of the Prosperous Armenia Party and Rule of Law, which is part of the ruling coalition. The Armenian National Congress and the Heritage Party declined to meet with the president.

On Wednesday, Rustamyan had announced that his party would be pushing for the adoption of a seven-point platform proposed to Sargsyan in 2012, which includes changing Armenia’s government to a parliamentary system and the withdrawal of Armenia’s signature from the dangerous Armenia-Turkey protocols.

Following Thursday’s meeting, Rustamyan told Yerkir.am that the ARF-D delegation expressed its views on the current state of affairs in Armenia, as they pertained to the seven-point plan.

Rustamyan said that his party’s delegation expressed hope that the new government, which is to be appointed following the resignation of Prime Minister Tigran Sargsyan last week, will not be a continuation of the old one and would “instill hope and create an opportunity to open a new chapter.”

According to the ARF-D leader, Sargsyan promised the delegation that he would review their recommendations and assess the feasibility of including them in the new government policies. Rustamyan elaborated that the ARF-D’s posturing will depend on the president’s response to the party’s suggestions.

Rustamyan also clarified that while there was discussion about the soon to be formed government, the ARF-D delegation did not discuss any specific names, as the party’s aim is to ensure the proper reforms will take place to address the needs of the citizens of Armenia.

The ARF-D leader rejects rumors that his party was in negotiations with the President to form a new coalition government, emphasizing that the ARF-D’s cooperation with the government is contingent of the government’s willingness to adopt the party’s proposals.

Rustamyan also touched an earlier meeting the President had Thursday to discuss proposed changes to Armenia’s Constitution, which envisions Armenia changing to a parliamentary form of government.

He said that such a change created a good basis to continue future discussions, but added that any amendments to the constitution must be comprehensive and complete.