(armenianweekly.com) The Armenian Revolutionary Federation – Dashnaktsutyun (ARF-D) has supported and promoted a parliamentary system of government since independence, according to ARF-D Bureau representative Hrant Margarian. In an interview with Satik Seyranyan of Armenia TV’s R-Evolution program, Margarian explained that the ARF-D is supporting the proposed constitutional changes in Armenia, since it calls for a shift to a parliamentary system of government—something that, according to him, can greatly benefit the country. 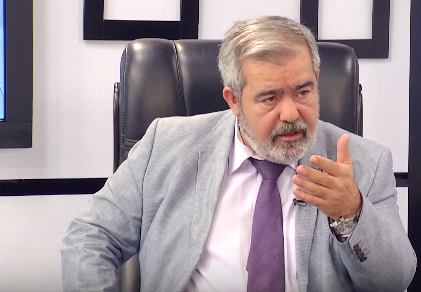 In the interview, Margarian explained that the first of seven points on the ARF-D’s political platform since 2012 has been to move to a parliamentary system, which would create an elections system that guarantees the forming and changing of a regime based on the population’s free expression of will; exclude corruption and the use of state-administrative resources; and allow a transition to a 100-percent proportional elections system.

Margarian explained that this shift would make sense for Armenia. “We [the ARF-D] have always said that it is not right for a country like Armenia to elect a parliament by a majoritarian electoral system—it’s bound to fail. The government must have a majority in the National Assembly,” he said.

Margarian also said that while a Parliamentary system of government would be best for the country, it too was not perfect. “We [the ARF-D] are not saying that all of the country’s problems will disappear when it shifts to a Parliamentary system, not at all. People still have a role to play [in the betterment of the country]. Good people will play a positive role, bad people will play a negative role,” said Margarian.

“For eight years now, they [other opposition parties] have been calling for an immediate and complete regime change; that the ruling regime is evil and that nothing can improve in the country as long as they are in power. This President’s second term is about to come to an end and during these eight years, immediate and complete regime change did not take place. Should we wait another eight years? What is it that we really want?” asked Margarian.

When asked if the ARF-D was advocating for the proposed changes because it aspires to join the ruling regime in a coalition, Margarian said that has never been a concern for the party. “We have said, time and time again, that there are no ‘taboos’ for us. We left the ruling coalition years ago for clear reasons [Turkey-Armenia protocols]. Since then, we have outlined our political platform of seven fundamental points and have announced that we are willing to work with any power—ruling or opposition—that accepts those points and employs them as a guiding principle.”

According to Margarian, three out of the seven points outlined by the ARF-D are solved with the new draft of the constitution.

Many opposition parties and activists have said that the constitutional reforms will allow President Serge Sargsyan to retain power and bypass the standing constitutional ban on a third presidential term. They have claimed that Sargsyan will aspire to become Speaker of the National Assembly or Prime Minister, and as the leader of the ruling Republican Party of Armenia (RPA), this will allow him to retain the main branches of power. To this, Margarian explained that there is nothing stopping the President from doing that today. “Even with our existing constitution, the President could technically become Prime Minister when his second term is done. There is nothing stopping him from doing so in the constitution,” Margarian said.

The Commission on Armenia’s Constitutional Reforms, which is headed by Sargsyan, released the final version of the draft amendments to the constitution on Aug. 21. The draft amendments meet 90-95 percent of the ARF-D’s expectations, ARF-D parliamentary faction secretary Aghvan Vardanyan told reporters on Aug. 24, when he, along with ARF-D Bureau member and head of the party’s political affairs Armen Rustamyan, gave a press conference.

“We will do everything so that through the referendum, the people will accept our amendments,” Vardanyan was quoted as saying by Yerkir Media last month. He added that through these reforms, Armenia will be able to move in a new direction, and that he is certain the constitutional reforms will help solve some of the existing problems in the country.